Georges Simenon's dogged detective Jules Maigret must track down a serial killer in the seedy Marias district.
About this Event

July at CinemaLit highlights the work of Jean Gabin (1904-1976), one of the acting treasures of twentieth century French cinema. We're featuring four of his most enduring films spanning 35 years. Each film has some relationship to the criminal underworld, where Gabin's characters lived on one or another side of the law. Port of Shadows (1938) arrived during his early peak period, while Touchez pas au Grisbi (1954) gives us an older Gabin, authoritative yet vulnerable. Maigret Sets a Trap (1958) is the first of three entertaining films Gabin made as the detective Jules Maigret, and Two Men in Town (1973) is a biting drama of crime and punishment made at the end of his life.

Jean Gabin was born Jean-Alexis Moncorgé to café owning entertainer parents, the last of seven children. School didn't much agree with him, and he dabbled in show business before joining the military. Following his service in the French navy, he went on the stage, primarily as a singer at the Moulin Rouge and elsewhere, in a style made popular by Maurice Chevalier.

Gabin began appearing in silent films in the late 1920s, transitioning to talkies with little notice. His breakthrough came with Maria Chapdalaine in 1934. Major stardom was swift, as he appeared in a succession of outstanding films through the 1930s that burnished his standing as a romantic yet morally complex leading man: La Bandera, Pépé le Moko, La Grande Illusion, La Bête Humaine, and Le Quai des Brumes (Port of Shadows).

Atypically handsome, Gabin was blessed with an eloquent hound-dog face that could project a myriad of emotions without affect or artifice. Often cast as sardonic loners, one actress bemoaned costarring with him. She had a long dramatic speech to deliver while he stayed in the frame. Gabin simply listened, but she knew all eyes would be on him.

Gabin fought with the Allies in North Africa during World War II and was decorated for valorous conduct. He resumed film work in the mid-1940s, but times had changed. Encroaching middle age, poor choice of projects, and an ill advised on-screen pairing with lover Marlene Dietrich resulted in a career slump. A failed attempt at Hollywood stardom added to his downward spiral.

He enjoyed a great comeback with Jacques Becker's Touchez pas au Grisbi (Don't Touch the Loot) in 1954. He sustained renewed popularity with a series of three films as Georges Simenon's world weary detective Jules Maigret, including the well made whodunit Maigret Tend un Piège (Maigret Sets a Trap) in 1958. In 1973, he made the crime drama Deux Hommes dans la Ville (Two Men in Town) with Alain Delon.

Gabin made over 90 films, working with fellow giants such as directors René Clement, Max Ophüls, and Jean Renoir, and actors Jean-Pierre Aumont, Danielle Darrieux, Jeanne Moreau, Brigitte Bardot, Jean-Paul Belmondo, and Simone Signoret. At the end of his life, he was happily married, reduced his film output, bought a farm in Normandy, and raised trotting horses. Gabin died of leukemia in 1976 at age 72. By then, he was elevated to national hero. His remains were cremated, and scattered at sea from a naval ship with full military honors.

A serial killer is murdering women on the seedier back streets of Le Marais on hot summer nights. The district police aren't much help. They're one degree shy of absolute incompetence, while the resident investigator tries to pin the crimes on the local butcher. Detective Maigret suspects the killer is still out there, and he devises a plan of capture using human bait.

American theatrical release) was the first of three film adaptations to star Jean Gabin as the intrepid detective. It proved to be a superb match of actor and character. With his trademark pipe, Maigret has been at the job a bit too long. He's tired and forgetful, and is modest about his talent at crime solving. But soon enough we're impressed with his hunches and insights, and realize his self-effacement contributes to his success.

Director Jean Delannoy, with a varied background in acting, editing, screenwriting, and directing, handles the material superbly, overseeing crisp black-and-white photography by Louis Page and a noir influenced score by Paul Misraki. But perhaps Delannoy's highest achievement rests with the actors. Like any good whodunit, the film is packed with flavorful characters to arouse our suspicions and second-guesses, from Jean Desailly's pitiful Maurin, to Annie Girardot's woman of unclear motives, to Lucienne Bogaert as a widow to turn blood cold.

Maigret Sets a Trap is a fine example of the French policier, a popular film genre of the 1950s. On its initial release, New York Times film critic Bosley Crowther wrote, "If you haven't yet made the acquaintance of French [sic] writer Georges Simenon and his famous and fascinating Parisian detective, Inspector Maigret, you can't ask for a better introduction."

We will be viewing films on Kanopy and gathering online for a Popcorn Pop-Up Salon! All you will need is either a Mechanic’s Institute library card, or a San Francisco Public Library card, which will give you access to Kanopy and its treasure trove of movies. Make a reservation as usual via Eventbrite and watch the film on Kanopy at your leisure. You will receive a link to the Friday night CinemaLit salon on zoom two days in advance. On the night of the salon follow the link to Zoom. Matthew Kennedy will be here to share his insights, and listen to yours.

3: Enter the 14-digit bar code from your MI Library card

5: Kanopy will send verification to your email address.

You’ll be able to choose from a wonderful selection of films, including classics, pre-code, foreign films, and documentaries, including the films we’ve scheduled this month for CinemaLit.

If you are not a Mechanics’ Institute member, consider membership and click here to join online: 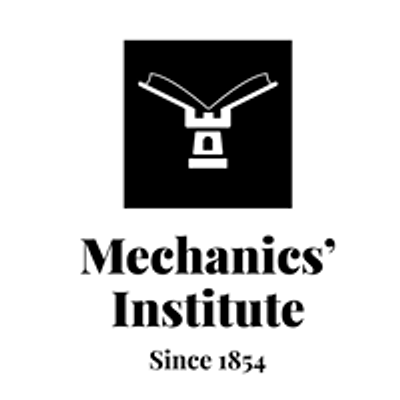