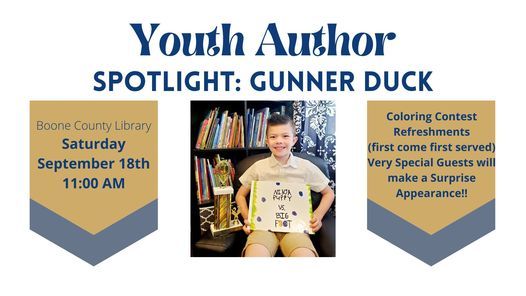 Advertisement
Gunner Duck is a young, local, author and illustrator who has won awards in various statewide and nationwide kids writing contests. He has also had his award winning book series titled "Ninja Puppy" published on various PBS websites, television programs, and it has been printed for public sales. Gunner's book series, in many ways, is a representation of the relationships and lessons that have been important to him in his life. As a 5-year-old in Kindergarten, Gunner wrote and illustrated his first book titled Ninja Puppy, which won 1st place in the Arkansas PBS Kids Writers Contest. As a 6-year-old in the first grade, Gunner wrote and illustrated the first sequel in his series titled Ninja Puppy and the Donut Avalanche, which won 2nd place in the Arkansas PBS Kids Writers Contest as well as 2nd place in the WJCT PBS Kids Writers Contest out of Florida. As a 7-year-old in the second grade, Gunner wrote and illustrated the second sequel in his series titled Ninja Puppy VS Bigfoot, which won third place in the Las Vegas PBS Kids Writers Contest. He has also been invited to attend a premiere party in Las Vegas for a PBS television program which will feature Gunner and the other young authors who won prizes in the kid’s writers contest. Gunner is the son of Brad and Holly Duck and the proud big brother of Shooter Duck. He attends school at Skyline Heights Elementary in Harrison.
Gunner's family, friends, and community, along with the Boone County Library, will be celebrating his most recent accomplishment during a Young Authors Spotlight event at the Boone County Library in Harrison AR on Sat September 18th at 11 am. This will also be a sendoff party as Gunner and his family will fly out to Las Vegas the following day to attend the PBS premiere party. At this event, Gunner will do a reading of his Ninja Puppy Series that will conclude with his latest award winning book Ninja Puppy VS Bigfoot. Autographed copies of Gunner's books will be available for purchase (preordering is recommended). There will be a coloring contest where the winner will receive a Ninja Puppy prize, donuts will be served on a first come first served basis, and some very special guests will make a surprise appearance! This event is free but if you would like more information on how to preorder/purchase an autographed copy of any of Gunner's books or other merchandise, please email [email protected] Come and join Gunner's family and friends to send him off to Las Vegas in style with this very exciting event!