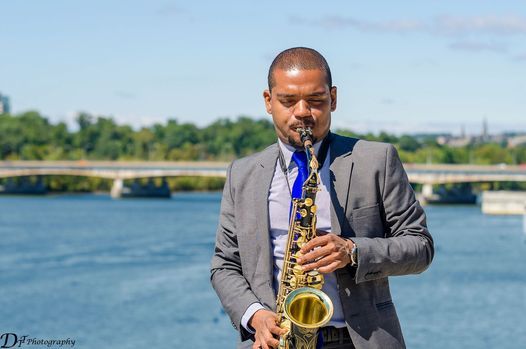 *** SHOW ORIGINALLY ON 6/11/21 HAS BEEN RESCHEDULED TO 6/12/21 DUE TO THE WEATHER!
Brij Coffeehouse & Juicebar proudly presents the Herb Scott Trio for their debut performance at our Wine Down Jazz Night series on Saturday, June 12th.
The trio will be performing from 6:00pm - 8:00pm, OUTDOORS & SOCIALLY-DISTANCED.
Address: 426 Oglethorpe Street NW,
Washington, DC 20011
Complimentary wine is included with your ticket purchase.
*Tickets are on sale now via the eventbrite link listed on this event. If the forecast calls for rain, this show will be rescheduled and tickets will be good for the rescheduled show, or you can message the Wine Down Jazz Nights Facebook page to request a refund.
ABOUT THE ARTIST:
"Herb Scott is a young, soulful powerhouse on alto saxophone. As a bandleader, his style often veers into the over-sweetened terrain of smooth jazz, but no matter what he plays, his fleetness and conviction are undeniable." - Capital Bop
D.C. Native and saxophonist Herb Scott is a star on the Washington, D.C. Jazz scene. While studying at the Duke Ellington School of the Arts under the award-winning educator Davey Yarborough, he performed with renowned trumpeter Wynton Marsalis and Jazz pianist Herbie Hancock. Herb studied Jazz Studies at Michigan State University under Jazz legend Rodney Whitaker and Professor Diego Rivera, and toured with the MSU Jazz Band. His career includes performances at the White House, Dizzy’s Coca Cola-Club in New York, the Lincoln Center, the world famous Baker’s Keyboard Lounge in Detroit, the Kennedy Center for the Performing Arts, Universal Studios Orlando, Constitution Hall, the Library of Congress, the Detroit Jazz Fest, the East Lansing Jazz Fest, the DC Jazz Fest.
Herb's first album as a band leader, “Introducing Herb Scott on Alto Saxophone, a NU-Jazz Collective”, was released in 2011. In 2015, Herb started the weekly Capitol Hill Jazz Jam session at Mr. Henry's Restaurant, where Grammy winner Roberta Flack once held her residency. Herb completed his first International Residency at the St. Regis Hotel in Doha, Qatar before returning to the U.S. and headlining at the Legendary Blues Alley Jazz and Supper Club in the fall of 2016.
In 2017 Herb formed a non-profit, The Capitol Hill Jazz Foundation which provides critical resources, including advocacy, to DC-based Jazz musicians, venues, and music education programs.
Herb released his new single "The Jazz Show" on January 9, 2019 for sale and streaming on all major platforms. And in 2020, Herb stepped up his jazz/rap fusion style with more tracks including “At the Jazz Show Original”, Private Concert”, and “Baila”.In July, 2020 Herb was named a DC Star by the DC Government’s Office of Cable Television, Film, Music and Entertainment Agency (OCTFME).