Advertisement
Come see the United States Air Force Band of the Golden West on our Bay Area Tour for the USAF 75th Anniversary!
About this Event

Come see the United States Air Force Band of the Golden West on our Bay Area Tour! 2022 marks the 75th anniversary of the USAF and we are celebrating with patriotic selections. All events are FREE and open to the public!

The Concert Band is comprised of nearly 50 musicians and is the largest performing ensemble within the United States Air Force Band of the Golden West. It has performed for thousands of listeners in live concert appearances and for millions worldwide via its numerous recordings and television and radio broadcasts. Throughout its history, the Concert Band has collaborated with some of America's leading band conductors, receiving enthusiastic critical acclaim as one of premier musical organizations of its kind.

Touring the western states of California, Oregon, Washington, Nevada, and Arizona, the Concert Band performs a wide variety of music. This includes standard concert band/wind ensemble literature, orchestral transcriptions, military marches, jazz and pop arrangements, Broadway standards, and of course, patriotic music. Its wide and varied programs offer something for everyone and is an excellent choice for family entertainment. 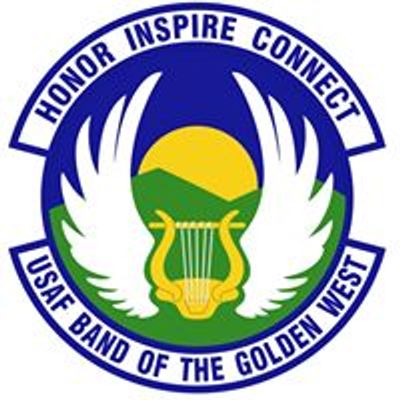 Host or Publisher USAF Band of the Golden West