TUESDAY TALKS: FOR A LAUGH: COMEDY WRITING FOR WEB AND TELEVISION 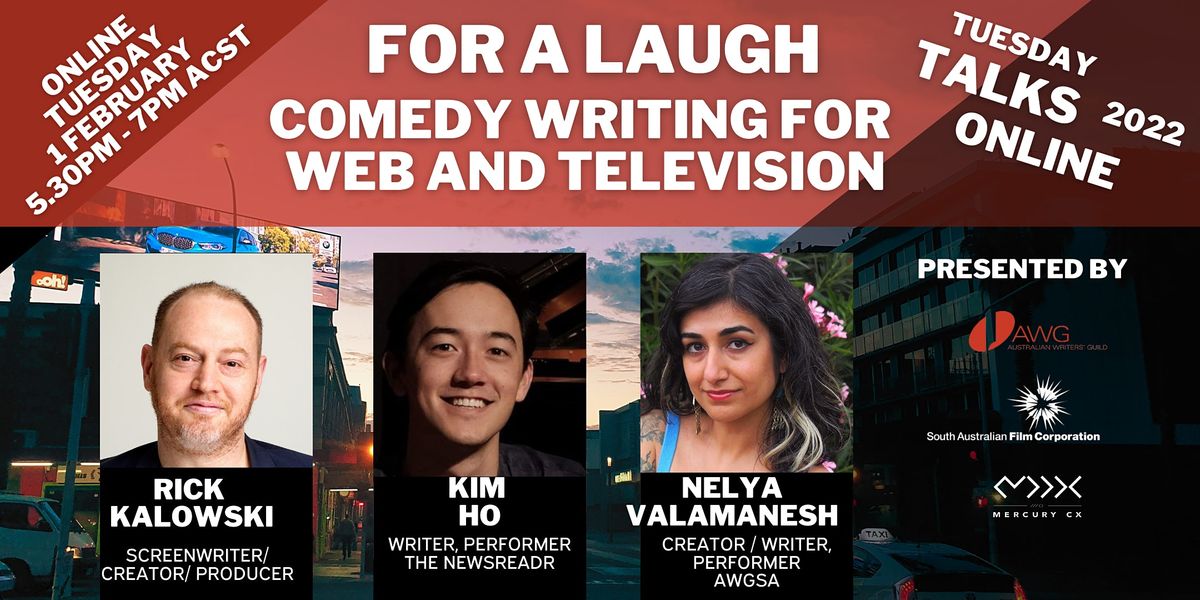 Advertisement
An exclusive ‘in conversation’ with Rick Kalowski, former ABC Head of Comedy, and writer/performers Kim Ho and Nelya Valamanesh
About this Event

FOR A LAUGH: COMEDY WRITING FOR WEB AND TELEVISION

Tuesday Talks presents an exclusive ‘in conversation’ with Rick Kalowski, former Head of Comedy at the ABC and Kim Ho, writer on ABC’s The Newsreader.

These three provide bookends to the Australian comedy writing landscape, Rick with over six years at the ABC and his own narrative comedy ‘At Home With Julia’ and Kim and Nelya, emerging artists, making their way in this incredibly tricky terrain.

Writing any form of comedy is an extremely hard task and finding a pathway to getting your comedy voice heard is particularly difficult in Australia at the moment. Rick and Kim, interviewed by local writer Nelya Valamanesh, will examine possible pathways, pitfalls, and provide insider advice on how to promote your comedy projects, especially from a person of colour perspective. In this exclusive online stream, our guest panel will discuss approaches and best media for writers and other creatives to give their work a chance in the comedy writing world.

This in-conversation event will include Q&A.

From 2013-2020, Rick was ABC Head of Comedy, overseeing more than 100 scripted titles (including 20 internationally co-produced seasons) across ABC TV, iView, online and podcast ^^. To date, they have earned 85 AACTA nominations, including an unprecedented sweep of every Best Comedy Series and Best Comedy Performance nomination at the 2019 Awards.

His own multi-awarded credits include creator/writer/producer of ABC satires At Home with Julia and Wednesday Night Fever, and his first screenplay, political comedy The Honourable Wally Norman, produced by Emile Sherman (The King’s Speech), opened 2003 Sydney Film Festival.

He is a passionate advocate of empowering marginalised voices. His latest play, THE GREAT AUSTRALIAN PLAY, premiered at Theatre Works in St Kilda in February 2020. Further theatrical works include BURIED KINGDOM, which was selected for the 2019 Typhoon Festival of play readings, co-ordinated by Yellow Earth Theatre in London. Kim also won the Sydney theatre Company’s Patrick White Award in 2018 for his play MIRROR’S EDGE.

Kim has a number of television projects in development and has worked on projects for Matchbox and Northern Pictures. Kim has also co-written on the upcoming series THE NEWSREADER for Werner Films. His 2013 short film, LANGUAGE OF LOVE was in the Official Selection for the Sundance Film Festival YouTube Showcase in 2014.

Nelya Valamanesh is an Adelaide-based artist who has produced works on a range of platforms. Nelya’s vision through all of her creative avenues has been to speak her truth as a proud queer Persian/Australian woman and elevate unspoken voices of colour and other marginalised groups.

During her career, she has DJed, co-facilitated theatre workshops, and freelanced in the film industry. Currently, she is in pre-production for her own web series which has garnered support from the South Australian Film Corporation (SAFC), Adelaide Film Festival (AFF), Closer Productions and Australian Film Television and Radio School (AFTRS). She was also a finalist in the Mercury CX’s Pitch-o-Rama competition in 2019 and 2020 and was accepted to AFTRS National and State Talent Camps.