On March 19 the Michael C. Carlos Museum of Emory University will present the exhibition Indigo Prayers: A Creation Story a series of paintings by local Atlanta artist Charmaine Minniefield inspired by her time in the Gambia West Africa searching for her grandmother's ancestral lines. The resulting body of work builds on an ongoing exploration of the Ring Shout an African American practice of resistance whose West African origins predate enslavement. This full-bodied rhythmic prayer was taught to Minniefield by her great-grandmother. It was performed by her ancestors during enslavement as a way to secretly preserve their African identity.

Minniefield’s work explores indigenous pigments like indigo crushed oyster shells and mahogany bark as evidence of cultural preservation through time and across the Middle Passage. Her work recalls the history of these elements as ancestral totems reaffirming identity like the Adinkra symbols in freedom quilts hidden in plain sight to show the way home. Minniefield inserts her own body into each work as an act of remembrance. Her movements embodied memories of her maternal ancestors reassert Black identity and resilience as resistance today.

Indigo Prayers: A Creation Story is being presented in conjunction with Minniefield’s Praise Houses which recreate the small single-room structures in which enslaved people gathered to worship. The first in the series of Praise Houses was constructed at Oakland Cemetery in conjunction with Flux Projects to celebrate Juneteenth 2021 and honor the over 800 enslaved people interred in the cemetery’s African American burial grounds. While Minniefield’s Praise House at Oakland has now closed she plans future locations in downtown Decatur on Emory University’s Atlanta campus and at South-View Cemetery where Congressman John Lewis was laid to rest. 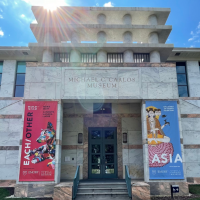