Stand With Ukraine: Day of Solidarity in Washington, D.C.

Advertisement
Calling Ukrainians, Ukrainian-Americans, friends, and supporters of Ukraine from all over the United States to come to Washington, D.C.!
About this Event

Please register so that the organizers can plan the events accordingly.

Calling Ukrainians, Ukrainian-Americans, friends, and supporters of Ukraine from all over the United States to come to Washington, D.C. to show solidarity with Ukraine, and support for its independence, and territorial integrity within its internationally recognized borders, including Crimea and the temporarily occupied regions of eastern Ukraine.

1) 2:00-3:00 PM EST at the Lincoln Memorial--Eighth Annual Commemoration and Candle Vigil for the "Heavenly Hundred/Nebesna Sotnia" to honor the fallen heroes of the Ukrainian Revolution of Dignity in 2013-2014, and the 14,000 soldiers and civilians who have died in the eight-year ongoing Russian war in eastern Ukraine.

For those who cannot travel to Washington, D.C. for this event, we ask you to please create a “Stand With Ukraine” event in your home city on the same day as a national "flash mob." We ask that you post your pictures and the following hashtag #StandWithUkraine.

Our objectives for the rally and peaceful march are:

1) To demonstrate our unity in support of Ukraine’s sovereignty and territorial integrity.

2) To demand an end to Russia’s ongoing war in Ukraine and the occupation of Crimea and other territories in eastern Ukraine, and the release of all Ukrainian citizens unjustly imprisoned by Russia.

3) To request the Biden Administration To:

*Enact potent sanctions (i.e. stopping Nord Stream 2) in response to Russia’s aggression in Ukraine and its failure to de-escalate and withdraw its forces from the Ukrainian border;

*Prepare and announce further crippling sanctions (i.e., cutting Russia off from SWIFT) that would trigger immediately upon another invasion of Ukraine; 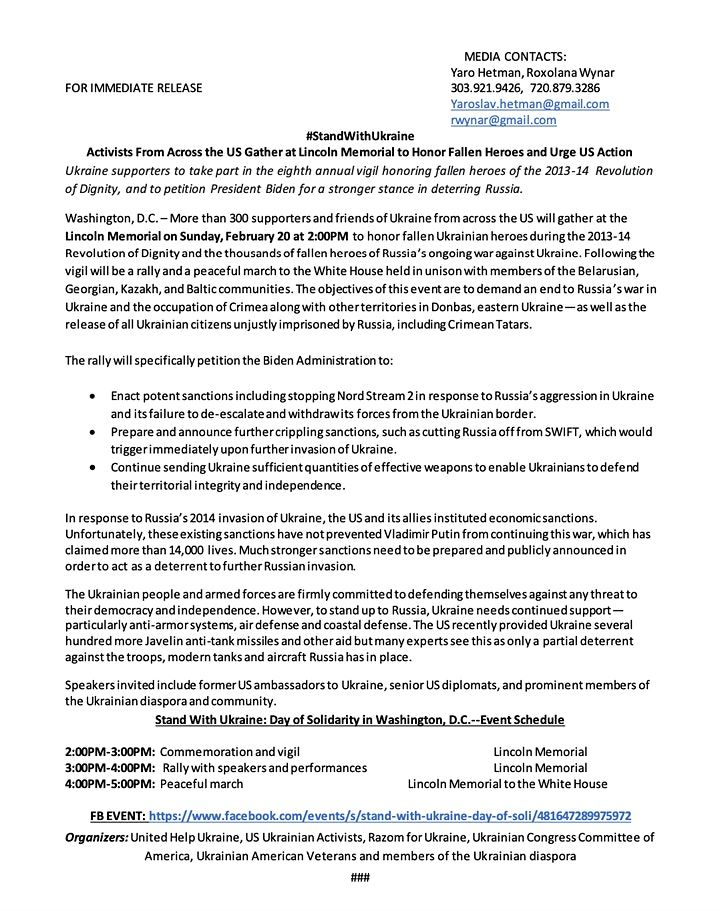 Host or Publisher Razom for Ukraine