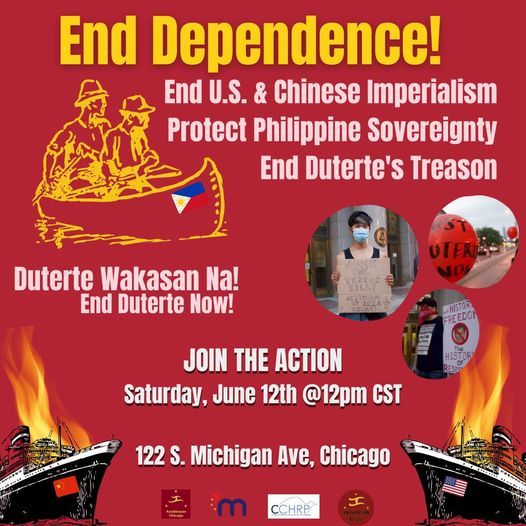 Join us in front of the Chicago Philippine Consulate as we call to uphold sovereignty of the Philippines and to END DEPENDENCE on the U.S. and China, which has encroached and maintained a hold on Philippine land and economy!
#AtinAngPinas #ChinaLayas #DutertePalpak
--
June 12, 1898 is widely recognized as Philippine Independence Day, marking the Filipino people’s hard fought victory ending over 300 years of Spanish colonial rule. It would be a short-lived victory as President Emilio Aguinaldo, the first puppet president, would later bow down to protecting U.S. interests. The next century would be the era of U.S. occupation and imperialism on the Filipino people with nominal or bogus “independence” granted to the Philippine on July 4, 1946.
But in reality, is the Philippines truly independent and free from foreign control today?

The U.S. continues to maintain control and influence over the Philippine economy, culture, military, and politics in the form of neocolonialism. This month marks the anniversary of the Visiting Forces Agreement (VFA) which was recently reaffirmed by the Biden administration alongside the Mutual Defense Treaty (MDT). The recent Balikatan “should-to-shoulder” exercises between U.S. troops and Armed Forces of the Philippines (AFP) and these unequal agreements make it glaringly clear the Biden administration will continue trampling on the sovereignty of the Filipino people. U.S. imperialism remains the principal enemy of the Filipino people.

At the same time, in the past decade we have seen the Chinese military violently take over the West Philippine Sea despite the 2012 United Nations ruling in favor of the Philippines’ claim of sovereignty over the region.
Meanwhile, President Duterte has shamelessly allowed Chinese military, naval troops, and commercial fishing boats to displace Filipino fisherfolk and illegally pillage the Philippines’ vast natural resources, marine life, and larger area estimated to hold 130 billion barrels of oil. Recently, the Chinese navy violently chased down Filipino fisherfolk with missile attack crafts near Palawan. The income of Filipino fisherfolk has drastically dropped by 70% with the presence of these Chinese vessels. This is in addition to Duterte signing away the ancestral land of indigenous people to Chinese foreign corporations such as the New Centennial Water Source-Kaliwa Dam Project and Chico River Irrigation project.

Even during the global health pandemic, China continues to take advantage of the Philippines through “vaccine diplomacy,” selling the Philippines overpriced SinoVac vaccines in exchange for our Philippine seas and major industries. Duterte’s reckless borrowing from China has only demonstrated that he is the biggest traitor to the Philippines.

Where is the adequate government aid, vaccines, and health services promised to the Filipino people? Why doesn’t Duterte uphold and assert the right of the Philippine fisherfolk to their livelihood against China's threat of their navy??

--
This is why we call:
End Duterte's Treason!
End U.S. & Chinese Imperialism!
Protect & Uphold Philippine Sovereignty in the West Philippine Sea!
--
While we commemorate the victory over Spanish rule, we must not forget the historic lesson that the freedom of the Filipino people will be hard fought, won, and protected by the masses themselves, not any puppet president. We must also maintain that our enemy is not the Chinese people; our enemy is Chinese imperialism and their ruling class interests that profit off the exploitation of our land, seas, and people. Host or PublisherAnakbayan at UIC