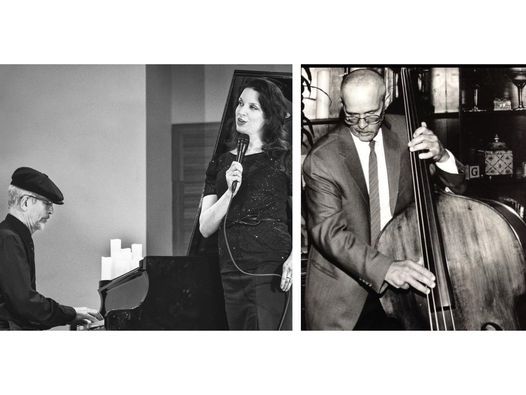 About Petra Van Nuis, Dennis Luxion & Doug Hayes:
Chicago based duo, vocalist Petra van Nuis and pianist Dennis Luxion have been noted for their “seamless camaraderie” (Chicago Jazz Magazine) creating "spellbinding sonic snapshots that movingly capture the intricacies of life" (Jazziz Magazine) with a style that is “hauntingly atmospheric and filled with creative substance” (All About Jazz Magazine) taking listeners to “a place where the agony, comfort, and hope of life meet” (Japan's Jazz Critique Magazine).
“A veteran Chicago pianist of impeccable taste and considerable harmonic imagination” (Chicago Tribune), Dennis is best known for being Chet Baker's pianist in the 1980s in Europe where they toured extensively and made six recordings together. Recent overseas performances include a tour of Southern Africa as part of the Rhythm Road:American Music Abroad program administered by Jazz at Lincoln Center. Praised for possessing “a light, gorgeous, and fairly delicate voice…a gift for melody and plenty of rhythmic confidence” (Downbeat Magazine), Petra regularly tours Europe and is known around Chicago for her celebrated Recession Seven band and her intimate duo with husband, guitarist Andy Brown.
In October 2018, after several years and countless gigs together, Petra van Nuis and Dennis Luxion documented their synergistic collaboration with the recording "Because We're Night People," a collection of evening related songs. In addition to the US release,"Because We're Night People" was re-released in Japan on Muzak, the record label responsible for introducing Petra to Japanese audiences by re-releasing two of her previous recordings. "Because We're Night People" was chosen by All Nippon Airways (Japan's largest airline) as in-flight entertainment for January/February 2019. The CD was given 4 stars and included in the Best Of 2019 issue of DownBeat Magazine, the nation's leading jazz periodical. Famed jazz writer Doug Ramsey praises “a highlight among vocal albums...distinctive...delicious...just the right blend of sadness and wit...a long stay on most listeners’ shelves.”


Petra and Dennis are thrilled to collaborate with the masterful virtuoso bassist Doug Hayes for this evening's performance at Epiphany Center for the Arts! The Trio will present a meditative and meaningful collection of life affirming tunes celebrating human connection!
Advertisement Host or PublisherEpiphany Center for the Arts