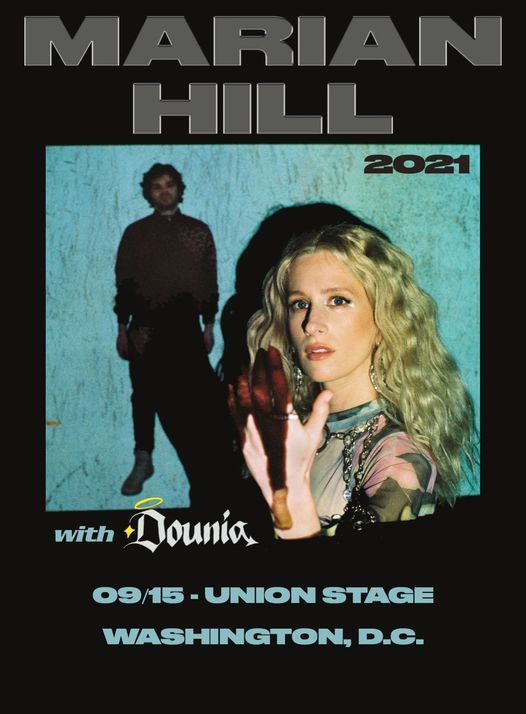 Advertisement
Advance GA $29.50 | Day of GA $32.50 | Premier Plus $40
If Marian Hill’s first three projects were establishing the electronic-pop duo’s music identity, their next era is deconstruction, and rebirth. NYC producer Jeremy Lloyd and vocalist Samantha Gongol are eager to get back into the thick of it, starting with their freewheeling new project, Was It Not, expected early in 2020.
Previous viral singles Down and One Time, inadvertently boxed the duo inside their signature style — minimalistic soundscapes embellished with hi-hats and glossy glitches. Now, with newfound energy, Lloyd and Gongol are challenging their fans, and themselves, on what Marian Hill can sound like.
Growing up in Havertown, Pennsylvania, Lloyd and Gongol became friends during an eighth grade production of The Music Man, the musical from which they took their name. Throughout their teenage years, they constantly shared songs they’d written with each other. Lloyd began experimenting with electronic and hip-hop production, and in college, they wrote 2013’s Whiskey stumbling upon their ostensibly first “Marian Hill”-sounding song. After Lloyd sent the track to nearly 60 different music blogs, the single got picked up, and started climbing the charts.
In 2013, they released their debut EP, Play, and two years later followed it with Sway, an expanded collection of their songs, this time officially released through Photo Finish and Republic Records. The seven-track project featured the smokey, trap-jazz hit One Time, which went viral on Vine and rewarded Lloyd and Gongol with a nice bump in popularity. They also strayed a bit out of the spare, electronic “Marian Hill” sound they’d established, with synth ballad Deep, and Got It, a bold, dance track.
At this point, Lloyd and Gongol were beginning to feel the strains of their rapid success with Marian Hill, a project they originally created for fun and hadn’t thought much about regarding its identity and how it would be perceived by outsiders. “One of the most amazing things about being discovered on the internet is you don’t have to tough it out at bars and shows, it kind of happens over night,” Gongol says. “But it also didn’t give me time to figure out my performance, to become confident.”
Act One, their debut record, arrived in 2016 and brought the spotlight of virality onto the duo again. Apple featured the album’s single, “Down,” in an AirPods commercial nearly a year after Act 1’s release, boosting the infectious single to #21 on the Billboard 100, and pushing Marian Hill through the mainstream bubble. “It happened so quickly we were constantly playing catch-up,” Gongol says. They rapidly shot a music video, played Fallon, and performed at Grammy parties. “That sound was everywhere, for a couple months,” Lloyd says.
Marian Hill showed how prolific they can when they returned with their sophomore record only a year later titled Unusual (June 2018), 10 taut tracks including lead single Subtle Thing that garnered various tastemaker press approvals from the likes of PAPER Magazine, Billboard & Refinery 29 to name but a few. The record saw the duo solidify their position as a singular voice in modern pop and was paired with a series of ten one minute visual episodes invoking the work of filmmakers Roy Andersson and Peter Campus while conjuring a surreal world parallel to ours where the mundane becomes uncanny.
Fast forward to now, and Marian Hill are ready to step into their next chapter with new label partner Platoon. This era will be a reinvigorated take on what you think you know about “Marian Hill”. You can expect a new collection of songs that pulls from the spare, woozy landscapes of their earlier works with an added layer polish. Including a rare feature from NYC-based crooner Dounia, these songs are a playground of sounds that finds the duo letting loose. “We’re not taking ourselves so seriously at the moment,” Gongol says. “It’s nice to have this time to experiment and write things we wouldn’t have necessarily written.”
Lloyd’s wound-up, big-bass production on the sultry take a number makes for a compelling contrast against upcoming star Dounia and Gongol’s satin vocals. On eat u alive, Steve Davit makes a boisterous return to his traditional role on saxophone, making for a dangerous late-night bop. Elsewhere, Gongol shape-shifts her voice into new characters, fed through distorters, vocoders, harmonizers, bending into an infinitely refracting surface for Lloyd to bounce his beats off of.
“With the way we’re thinking about it,” Lloyd says, “let’s take what we’ve learned, and be us as much as we can, and do it.”
Then there’s “no one knows,” a watery, synth ballad that feels like a new moment of departure in style for the duo. Gongol sings vulnerably about her insecurity in a relationship before bringing forth an irresistible hook that calls back to the timeless hits from the early-aught era of R&B. It can be considered their most straight-forward song, the least-embellished — but that may just be the point. “There was a lot to prove on our previous stuff. Something to keep building, to get right,” Lloyd says. “We’ve done all that. Let’s get back to the fun of it.”