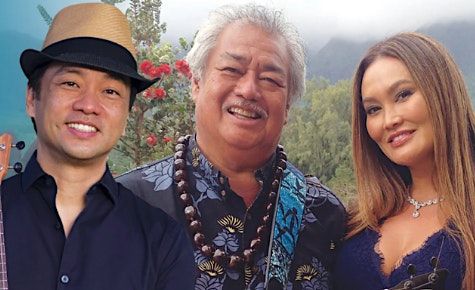 DANIEL HO is a six-time Grammy winner, with 4 of his Grammy credits as producer of George Kahumoku’s 4 Grammy wins. He is multi-instrumentalist, composer, arranger, and performer, with talent and versatility on ‘ukulele, slack key guitar, piano, and vocals. His two other Grammy wins were with close friend Tia Carrere.

International star and two-time Grammy winner TIA CARRERE first made her name showcasing her considerable singing and acting chops in Wayne’s World. She went on to featured roles in film and television, returning to her Hawai‘i roots with her Grammy-winning albums with Daniel Ho.