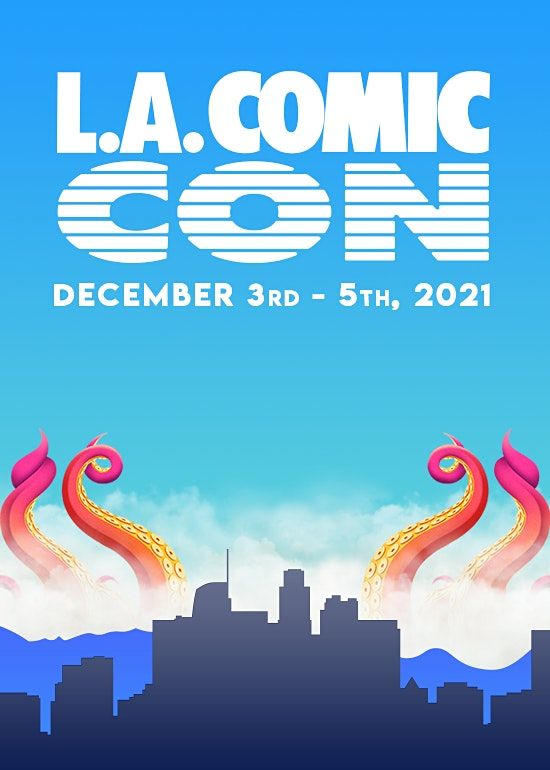 L.A. Comic Con to Implement Numerous COVID-19 Health and Safety Measures in Compliance with State and Local Policies and Guidance

WHAT: L.A. Comic Con, L.A.’s largest event for comics, gaming, sci-fi and pop culture, signals a return to full-scale in-person events, leading the way as the first Southern California convention of its kind to bring fans back since October 2019. Full compliance with all Los Angeles Department of Public Health CV-19 guidelines for mega events will be strictly followed, including proof of vaccination or negative test results, and masks will be worn by all attendees. In 2019, over 123,000 fans attended L.A. Comic Con for celebrity panels, autograph signings, activations, comics, cosplay, and pop culture fanfare. The event plays host to 800+ diverse artists and vendors, selling comics, collectibles, art, toys, apparel, and everything in-between. This year, attendees will get up close and personal with some of the biggest and best names in the entertainment industry with a handpicked selection of panels, events, special exhibits, and meet and greet opportunities. Special guests include Zachary Levi, Ming-Na Wen, Giancarlo Esposito, Bruce Campbell, Nichelle Nichols, Tom Kenny, Tom Welling, and many more.

Consistent with Los Angeles Department of Public Health Guidelines, for this year’s convention, here are a few extra measures that will be taken to ensure the health and safety of everyone attending are considered:

All fans and guests will pass through two checkpoints: a COVID vaccination/negative test verification station and then security. Free PCR tests (results available in 15 minutes) will be available for those lacking vaccine verification

All cleaning standards from LA County and Centers for Disease Control (CDC) will be followed before, in between and after all sessions

Extra space: With well over 1.2 million-square feet of exhibition space (double the space from 2019), fans will have plenty of room to spread out and maintain safe distances

L.A. Comic Con is teaming up with Atomic Studios to bring you the ultimate celebration of Star Trek, honoring Nichelle Nichols and her contribution to society and pop culture. L.A. Comic Con will host the ultimate Trekkie experience on Saturday and Sunday. Over 35,000-square feet of exhibit space will be dedicated to all-things Star Trek and space exploration. Join over 20 actors from all the Star Trek series for panels, content, merchandise, photo opportunities, and more for an experience that is truly out of this world.

L.A. Comic Con is taking over the West Hall of the Los Angeles Convention Center for the first time, thanks to its partnership with PCB Productions. In the 147,000-square-foot West Hall, fans will have the opportunity to watch competitive gaming on the Tiltify Arena stage, created by The Trade Group, past producers of I.E.M. and Dreamhack events. With seating for 800–1,000 patrons, the Arena will be the center point of a hall where fans can play PC games on high-end computers, attend workshops, and interact with some of the top video game and Anime voice-over talent in the industry in intimate settings. Fans will be able to participate in Thankmas, a fundraising campaign to help end global homelessness.

Pop culture collectibles giant Sideshow is exhibiting at Los Angeles Comic Con for the very first time. Sideshow’s booth will feature high end collectibles inspired by fan-favorite characters from the worlds of Marvel, DC, Star Wars, and more — including many that will be making their first physical convention debut.

Iconic comedy club Laugh Factory is taking over the Main Stage on Friday night of L.A. Comic Con with an exciting two-hour lineup. Fans can kick off their L.A. Comic Con weekend by laughing out loud with some of the best names in stand-up comedy.

Cosplayers will compete for cash and other prizes in the 6th Annual Cosplay National Championship in one of three categories: Master, Journeyman, or Novice. All genres are welcome including characters from film, television, theater, comics, video games, sci-fi, anime, horror, and original creations.

Join your favorite Clark Kent and Lex Luthor as they bring some of your favorite Smallville moments to life. Tom Welling (Clark Kent/Superman) and Michael Rosenbaum (Lex Luthor) will be reading scenes from the series and bringing fans up to act and improv. Enjoy and laugh as Welling and Rosenbaum attempt to get through scenes from the pilot and beyond without breaking character.

The sneak peek will feature:

Fans are encouraged to download the Oasis Digital AR app, in the Apple App Store or on Google Play, to experience Augmented Reality events in and around the Los Angeles Convention Center. Convention goers can participate in the official Los Angeles Comic Con Scavenger Hunt, brought to you by our digital innovation partner, Liquid Avatar Technologies. Find and collect QR codes hidden around the show to win amazing digital stickers, discounts, and special offers! Once you’ve completed the scavenger hunt, visit the Liquid Avatar booth to collect even more great prizes like limited edition commemorative NFTs, collector Liquid Avatars and more!

Spongebob and Squidward are two of the most iconic animated characters ever created, and part of what makes them so recognizable and beloved are their unique voices. Join Tom Kenny (Spongebob Squarepants) and Roger Bumpass (Squidward Tentacles) for a discussion about one of the longest running shows in television history.

From 1993–2000, Boy Meets World explored the trials and tribulations of growing up in the 1990s. Join Will Friedle (Eric Matthews), William Daniels (George Feeny), and Rider Strong (Shawn Hunter) for a chat about this successful and popular series.

Clark Kent grew up in Smallville, Kansas, and before he became Superman, he not only had to deal with being different from everyone else, but he also had to learn his place in the world. From 2001–2011, Smallville brought us a dramatic look at Clark Kent’s formative years. Tom Welling (Clark Kent/Superman), Michael Rosenbaum (Lex Luthor), John Glover (Lionel Luthor), and Laura Vandervoort (Kara), will present an illuminating look at this popular show.

The Mandalorian took Disney+ by storm and has become tremendously popular during its first two seasons. This Star Wars story, set in the years after the fall of the Galactic Empire, tells the tale of a member of the race of bounty hunters that spawned Boba Fett. Ming-Na Wen (Fennec Shand), Giancarlo Esposito (Moff Gideon) will regale convention goers with tales from one of the most innovative production sets ever built.

From 1993–1996, the Mighty Morphin Power Rangers sprang into action to fight all kinds of baddies and protect the town of Angel Grove, and the world at large. The original series, which was adapted from Japan’s Super Sentai series, launched more than 20 iterations and three feature films. Join Jason David Frank (Tommy Oliver/White Ranger/Green Ranger) and David Yost (Billy Cranston/Blue Ranger) for a discussion about this iconic franchise.

Adapted from a Japanese superhero manga, My Hero Academia is an anime that tells the story of a young boy, Izuku Midoriya, who wishes to enroll in a prestigious hero academy. English-speaking cast members J. Michael Tatum, Brandon McInnis, Ricco Fajardo, Alexis Tipton, and Christopher Wehkmap will discuss bringing this popular story to North American audiences.

Gerard Way, creator of The Umbrella Academy and The True Lives of the Fabulous Killjoys, and co-founder and lead singer of My Chemical Romance, will interview legendary creator Frank Miller (300, The Dark Knight Returns, Give Me Liberty, Ronin, Sin City) on the Main Stage Saturday, Dec. 4th! Enjoy the conversation between the two pop culture giants as they discuss comics, film and what's next for Frank Miller.

In the late 1970s, Bruce Campbell and Sam Raimi collaborated on a horror short called Within the Woods, which became The Evil Dead (1981) which Campbell co-produced and starred in as Ash Williams. Thanks in part to a ringing endorsement from Stephen King, Campbell and Raimi followed with Evil Dead 2 in 1987, and Army of Darkness in 1992. Campbell reprised the role of Ash in the Showtime series Ash vs Evil Dead for three seasons from 2015–2018. Ash has become one of the most iconic characters ever created in the horror genre. Campbell, who also produces and directs, is also known for roles in the film Bubba Ho-Tep and the TV series Burn Notice.

Zachary Levi is an accomplished actor, singer, and dancer, who has appeared in films, on television, and on Broadway. A regular voice actor on Robot Chicken, Levi is also the voice of Flynn Rider in 2010’s Tangled. He also voiced characters in Tangled: The Series. Most notably, Levi starred as the title character in Shazam! in 2019, and Chuck Bartowski in Chuck from 2007–2012. The Louisiana-native has also played the Asgardian Fandral in Thor: The Dark World and Thor: Ragnarok. His theater credits include First Date, She Loves Me, and Sunday in the Park with George.

The presenting sponsor of the Tiltify eSports Arena in the West Hall, Tiltify is a fundraising platform for the digital generation providing live, interactive technology that engages and inspires communities to donate or fundraise to important causes the world over.

AREA21 in the West Hall

AREA21, the collaborative project of DJ/producer Martin Garrix and producer/songwriter Maejor, is a conceptual sonic and visual exploration that has the duo making music containing universal messages about humankind as seen through the eyes of their alien alter egos M & M. Their adventures are portrayed through a series of songs and accompanying animated videos produced by award-winning animation studio, Titmouse (Run the Jewels, Dua Lipa). Convention goers can check out their videos in the West Hall expansion.

Liquid Avatar Technologies, L.A. Comic Con’s Digital Innovation Partner, will showcase its technology through integrations and demonstrations of verifiable credentials, digital identity, unveiling new and exclusive projects, hosting panels and meet-and-greets with writers, artists, and industry icons, and will also create and administer an Augmented Reality scavenger hunt in conjunction with its subsidiary, Oasis Digital Studios, to showcase a host of digital collectibles.

Legion M is the world’s first fan-owned entertainment company and partners with top Hollywood creators — from independent filmmakers to big Hollywood studios — to produce a slate of movies, TV, and digital content.

Popshop Live is a live streaming commerce marketplace that is transforming social shopping. The mobile streaming platform allows sellers to go live, sell their products to a community of shoppers and engage directly in real-time interactions. LA Comic Con and Popshop Live have partnered together to elevate the digital experience by giving attendees unlimited access to livestreaming the main stage through the Popshop Live app, interact with their favorite exhibitors after the convention is over with exclusive discounts and products, and finally bring LA Comic Con alive with a virtual convention in Spring 2022, streaming exclusively on Popshop Live!

That Hashtag Show writes and produces quality content to hype the films and shows you love, keeping you up to date with everything trending in geek pop culture.

Voodoo Ranger is excited to join everyone on the convention floor this year as the official beer partner of L.A. Comic Con!

WHY: Los Angeles is the entertainment capital of the world, and home to the most high-profile entertainers, artists, studios, and the center of the film and television industry. L.A. Comic Con is a celebration for all things pop culture and is meant to be a place where fans can meet their superheroes, comic book characters, and the creators behind them.

L.A. Comic Con is Los Angeles’ biggest and best multimedia pop culture convention, held annually at the Los Angeles Convention Center. L.A. Comic Con assembles the most exciting, new, and innovative players in comics, movies, sci-fi, fantasy, horror, anime, gaming, and all things pop-culture. Over 123,000 fans attended the 2019 event, making it Los Angeles’ ultimate pop-culture destination. L.A. Comic Con’s top priority is the safety and enjoyment of the show’s fans and regularly updates its CV-19 protocols. As one of the most diverse and celebrated geek and pop-culture events in the United States, L.A. Comic Con gives fans once-in-a-lifetime opportunities to truly enjoy safe interactions with their favorite creators and major players in the entertainment industry. 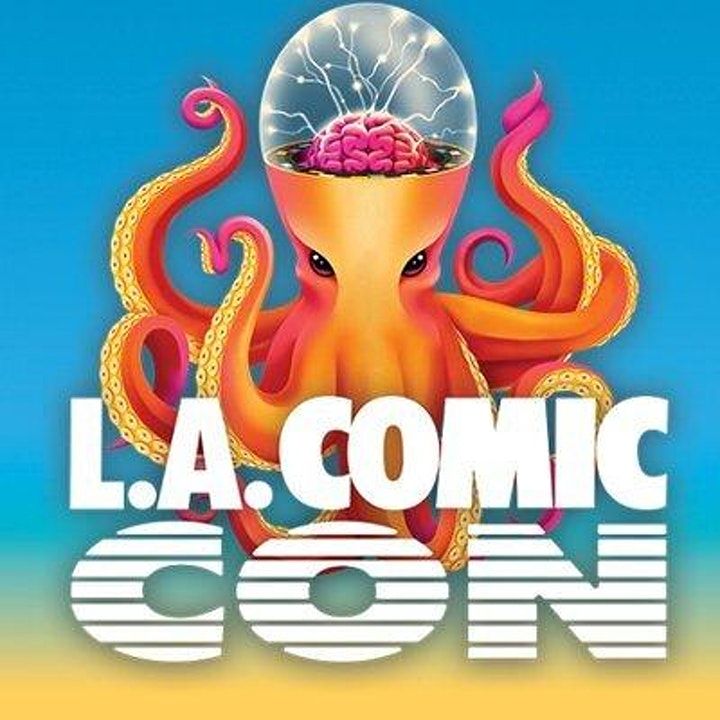 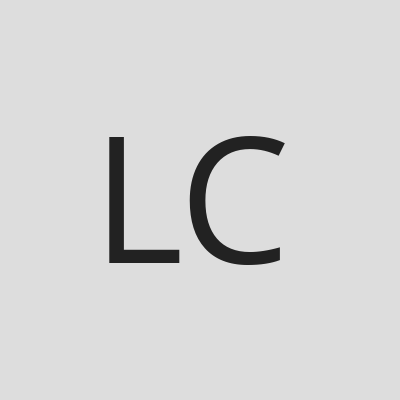