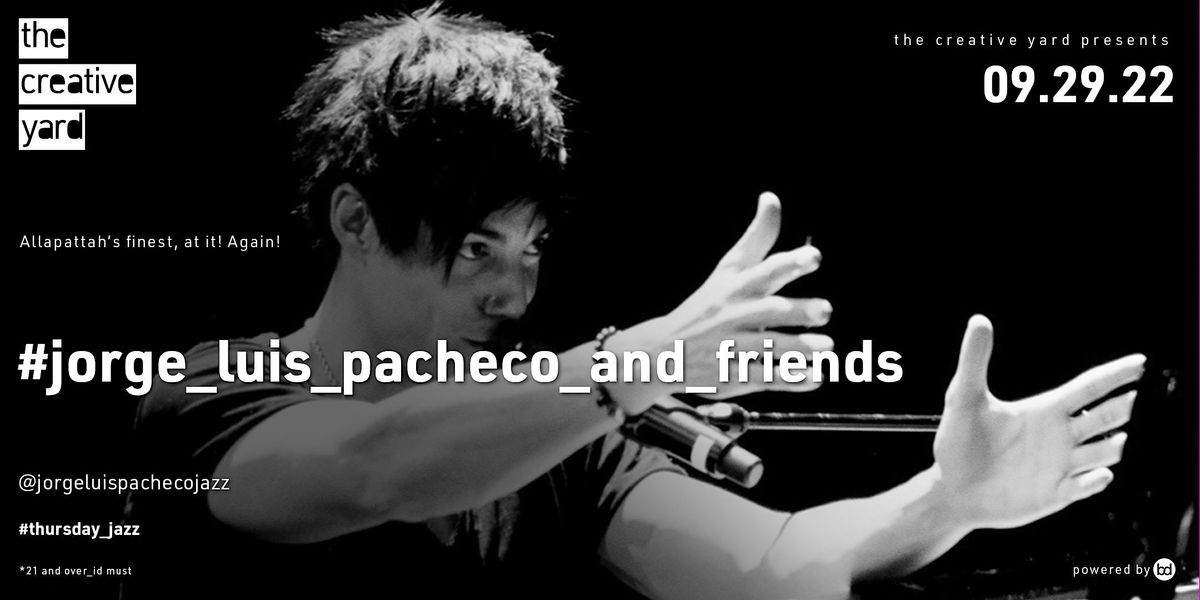 Advertisement
Allapattah’s finest, at it! Again!
#jorge_luis_pacheco_and_friends
by @jorgeluispachecojazz
About this Event
Thursday Jazz Night is brought to you by @the.creative.yardA marvelous night performing Jorge Luis Pacheco and Friends
#thursday_jazz

Hailing from Havana, Cuba, Jorge Luis Pacheco is one of the leading pianists and musicians of the new generation of jazz in Cuba. Winner of the Montreux Jazz Piano Solo Competition in Switzerland, Pacheco is a fiery young pianist with “flying hands.” He has performed all over the world, including in prominent jazz clubs such as Dizzy’s Jazz at Lincoln Center(New York), theaters, and festivals such as the Blue Note Jazz Festival in New York or The Piano Night in the House of Blues at the New Orleans Jazz Fest as well as the Sziget Festival in the City of Budapest, Hungary, or the Red Sea Jazz Festival in Israel among others. He also performed at the Kennedy Center in Washington several times with his quartet and Solo Piano Concert, as well as the legendary Apollo Theater, where a lifetime achievement award was presented to Herbie Hancock. He has collaborated with the likes of Wynton Marsalis and the JLCO, Arturo O’ Farrill, and the Legendary Lenny White, as well as with Dave Weckl and Richie Goods in trio format in 2018. Pacheco is a passionate, extravagant, exciting entertainer on stage and constantly captures the audience’s attention with his heartfelt performances and electric energy. Pacheco was the winner of the JoJAzz Award in Havanna, and also in 2017, Pacheco won the Best Solo and Performance Award in the Jazz Competiton “Made in New York” in New York City whit one of his own compositions, “Con el Pache me Voy” and some of the most recognized musicians in the world as a jury, it is the case of Randy Brecker, The legend of Lenny White and Mike Stern. Pacheco also has a Master’s in Composition from the Instituto Superior de Arte de La Habana.

He is a virtuoso pianist, composer, arranger, percussionist, and singer. Monty Alexander exclaimed that he “defies genre,” often playing Cuban jazz, traditional Cuban music, original film scores, and a new Symphony for Jazz Quartet and Symphony Orquestra that he composed, which is inspired by the music of South America and Afro Cuban Music where Pacheco showed the audience a range of different sounds that were from the most classic performed by the Symphonic Orchestra to the most contemporary by the Jazz Quartet and where both joined to achieve a balance between both musical worlds. In December 2020, Pacheco recorded a new album titled “The Lockdown Album” where Pacheco searched for new ways to expand his horizon as a pianist and as a composer. Since classical music has played an important role throughout his career, he decided to bring both worlds together, integrating his jazz compositions works from Chopin and Beethoven, navigating between these two worlds he loves, and mixing the sounds of traditional and modern jazz with my Cuban roots.

Also, we have Bazar

Space full of color brought to you by local artisans' handmade products and good vibes. ?

We can't wait to see you there!

*Seating is First Come, First Served. Arrive early for the best seats. Parties arriving separately or late are not guaranteed to be seated at the same table.

*General Admission and Table Seating are 21 and over. Please do not purchase tickets if you are not 21 years old. Your ticket will not be honored.

Please make sure you purchase tickets for the correct date and time.

NO REFUNDS OR EXCHANGES. 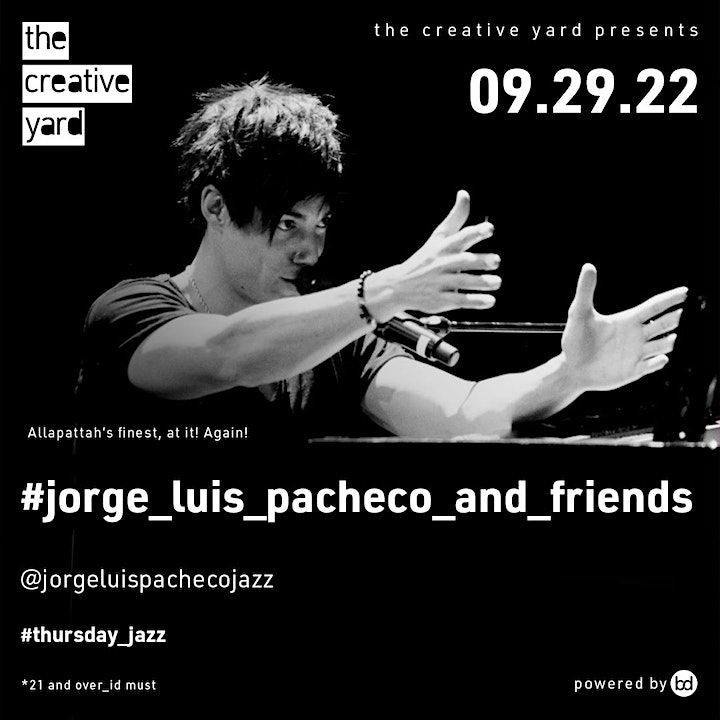 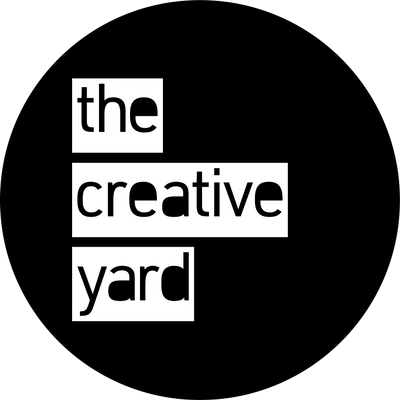 Host or Publisher The Creative Yard