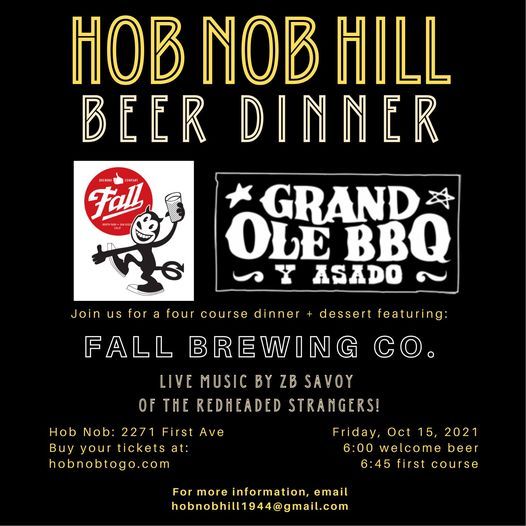 Advertisement
On Friday, October 15th, we are doing a beer dinner -- the first one in the history of Hob Nob Hill in our illustrious 78 year history!
We are partnering with Andy Harris of Grand Ole BBQ y Asado and Fall Brewing Company of North Park for a night of local beer, smoked meats...and now LIVE MUSIC featuring ZB Savoy Music of the The Red-Headed Strangers for a night of original Country and Covers.
We have created a pairing menu that we think you'll love:
Welcome Beer: Plenty For All
Course 1: Smoked Ham Hock w/ Festbier
Course 2: Sweet & Spicy Pork Rib w/ 12 Speed IPA
Course 3: Smoked Turkey w/ Goo Goo Muck IPA
Course 4: Brisket w/ ESB
We will also feature a dessert made with a Fall Beer made from our in-house bakery.
Our Partners:
Fall Brewing Co is one of our favorite local breweries. We have been avid supporters since their start. We always carry one of their beers on draft (usually Plenty For All). As one of the first local beers that we carried at Hob Nob, we wanted to celebrate this North Park brewery at our first Beer Dinner.
Grand Ole BBQ y Asado's owner Andy Harris is a partner at Hob Nob Hill. Andy has gained a loyal following locally, and has already appeared on Guy Fieri's Diners, Drive-Ins, and Dives. His smoked meat can currently be found at Flinn Springs in East County, and Petco Park in East Village. Reopening soon will be the original location in North Park!
We only have a handful of seats remaining for this Inaugural Beer Dinner. You can find them at www.hobnobtogo.com -- under the "Popular Items" or "Special Events" sections. Seriously, buy your tickets ASAP because we may sell out by the end of the week!
Advertisement 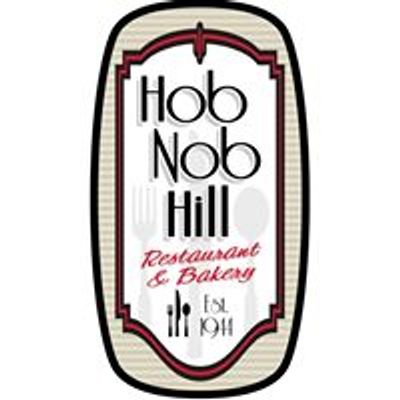