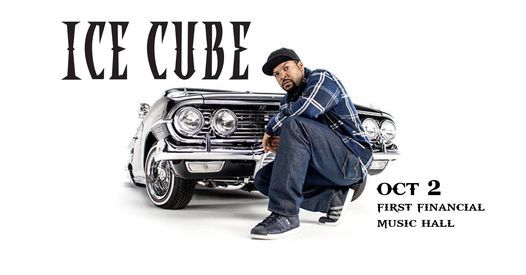 Advertisement
The Murphy Arts District (MAD) has announced that legendary rapper, Ice Cube will headline Saturday night, October 2nd of Musicfest weekend. Ice Cube replaces former scheduled artists, Snoop Dogg featuring Bone Thugs-n-Harmony, who cancelled last June. The concert will take place in the First Financial Music Hall beginning at 7pm. Tickets for the event will go on sale to MAD Members Wednesday, August 11th, 10am, CDT and to the public Friday, August 13th, 10am, CDT.
Ticket pricing:
Premium $150 (advance), $160 (day of show)
Pit: $85 (advance), $95 (day of show)
General Admission: $55 (advance) $65 (day of show)
*All tickets will incur a venue fee & sales tax at checkout.
Tickets are available in three sections; premium, pit, and general admission. Premium tickets include a seat in an elevated section located in the front right and front left of the stage. Premium tickets also include a private bartender for each section. Pit tickets are general admission, standing room only and located directly in front of the stage. General admission tickets are first come, first serve, located behind the pit section. General admission is standing room only with limited seating in the back of the room.
Ice Cube is an award-winning musician, actor, director, producer and CEO and founder of the Big3 professional 3-on-3 basketball league.
After penning the most memorable lyrics on N.W.A’s groundbreaking songs, Ice Cube left the group at the peak of its popularity because he was not being paid correctly. That move led to one of the most successful careers in music history. He was inducted into the Rock & Roll Hall of Fame in 2016, and as a solo recording artist he has sold more than 10 million albums while remaining one of rap’s most respected and influential artists.
Beyond music, Ice Cube has established himself as one of entertainment’s most successful figures and was honored with a star on the Hollywood Walk of Fame in 2017. In the film arena, he’s produced the Friday, Ride Along, Barbershop and Are We There Yet? franchises as well as the critically acclaimed, award-winning biopic, Straight Outta Compton. He is also an acclaimed writer and director who is best known for his acting.
While Cube loves making movies, his first passion will always be music. His latest album, Everythang’s Corrupt, was his 18th release as a solo artist or member of a group. Most recently, Ice Cube has been working on a supergroup album titled Mt. Westmore with California legends Snoop Dogg, Too $hort and E-40.
Advertisement