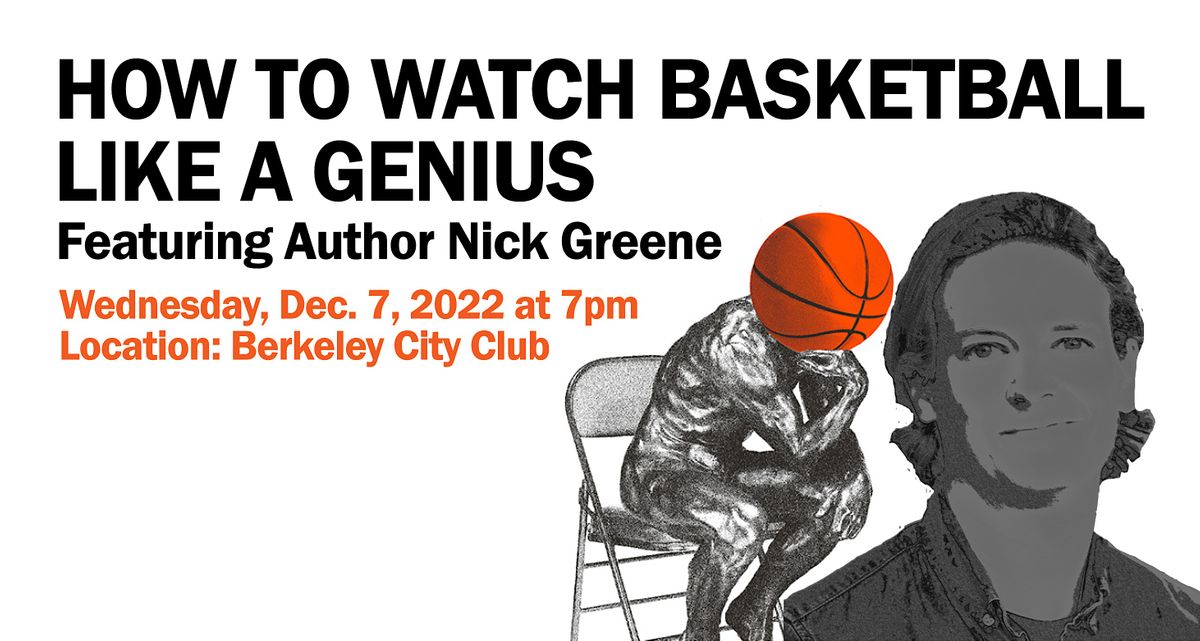 A moral philosopher, a meteorologist, a magician, and a maker of hand-pulled Chinese noodles walk into a bar. The bartender asks each one …

Oops! Wrong setup. But it’s no joke that Nick Greene did ask each of these professionals, all at the top of their games, to talk with him about his favorite game: basketball. Their perspectives, along with insights Nick gleaned from other eclectic experts changed the way Nick understood one of our most popular sports. Or, as the subtitle of Nick’s recent book unabashedly calls it: The Greatest Game on Earth.

On Wednesday, December 7, at 7 p.m., Nick will introduce us to what the main title of his book promises: . Undoubtedly, his presentation for Arts & Culture will increase your appreciation of the sport, which one reviewer describes as “insanely complicated… built on rules, athleticism, craftiness, charisma, and superstardom.”

This event is open to the public. Admission is $5 for members and $10 for non-members. Tickets are available on Eventbrite. Masks will be required.

Right up front, Nick admits two things: He can’t dribble to his left, and his approach to analyzing basketball will not improve your jump shot. What he does do exceptionally well is write with clarity, humor, and surprising juxtapositions. Plus, given that he’s a local, the Golden State Warriors figure heavily in his book. He’s also extremely well-versed in other teams, however, as well as in the colorful evolution of basketball and its most famous players.

As Nick says, he’s a “rabbit hole kind of guy” who enjoys doing in-depth research, often in unexpected ways, some involving personal adventures. He frequently writes about sports and music, but he also has done a head-spinning array of articles on unusual topics. These range from how he tried to ride all 659 miles of the New York subway system in one day; to how Hammacher Schlemmer continues to survive in the age of Amazon; to how a military manual, written in China in the 5th-century BCE, helped him lower his internet bill.

A Chicago native who still discusses the 1995 fight between Steve Kerr and Michael Jordan at a Bulls scrimmage, Nick is a contributing writer for Slate. He did stints as an editor-at-large for the online magazine Mental Floss and as web editor at the , and his work also has appeared in , , and magazine.

Our evening with Nick, coming early in the pro-basketball season, will give both devoted and casual basketball fans new ways to enjoy watching their favorite teams. His book will be available for purchase.