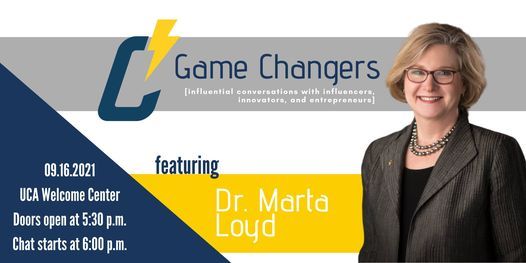 Advertisement
Join the Conductor for Game Changers with Dr. Marta Loyd, Executive Director of the Winthrop Rockefeller Institute.
Dr. Marta Loyd has served as executive director of the Winthrop Rockefeller Institute since 2014. Under her leadership and guidance, the Institute’s mission has been strengthened and clarified to focus on the Rockefeller Ethic, a unique approach to collaborative problem solving as modeled by Gov. Winthrop Rockefeller. As a team, she and her staff have strengthened external partnerships, nearly doubled the number of program offerings, implemented an evaluation system to measure impact, instituted core values into the organization, and secured the Gov. Winthrop Rockefeller Endowment which will fund operations for the Institute.
Prior to joining the Institute, she spent 17 years working at the University of Arkansas-Fort Smith, 12 of those serving as vice chancellor for university advancement and as executive director of the UAFS Foundation. During her tenure at UAFS, she led the effort to raise gifts and pledges totaling $57 million, increasing total assets of the foundation from $20 million to nearly $80 million. Prior to taking the helm of the UAFS Foundation, Loyd, a former dental hygienist, led the effort to start the dental hygiene school at then Westark College.
Dr. Loyd holds a Master of Education degree from the University of Arkansas and a Doctor of Education degree from the University of Missouri. She also completed the Institute for Educational Management at Harvard University. In her community, Dr. Loyd has served as a board member for the Morrilton Area Chamber of Commerce and the Petit Jean Mountain Community Association, and recently completed her term on the Federal Reserve Board of St. Louis’ Community Development Advisory Council. She serves on the Board of Directors for Healthy Active Arkansas and is a member of Rotary Club 99 of Little Rock.
Each month, the Conductor hosts a chat with a local influencer/entrepreneur. To date, the Conductor has hosted Arkansas Governor Asa Hutchinson; Conway Mayor Bart Castleberry; Amy Fecher, Executive VP of Operations at the Arkansas Economic Development Commission; Earnest Sweat, California-based venture capitalist; among others.
Don't miss a chance to hear about Marta's life and business advice, and network over food! This event is free and open to the public!
*Masks are required inside while on UCA campus*
Agenda:
5:30 p.m. - Doors Open + Food + Networking
6:00 p.m. - Chat with Marta Loyd
7:00 p.m. - Networking
Advertisement