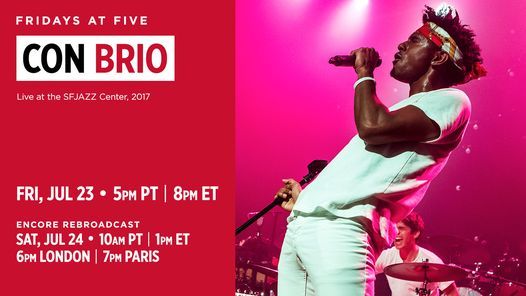 Fronted by the magnetic singer Ziek McCarter, the Bay Area-based Con Brio is the most electrifying soul/funk/R&B band on the scene. Named after the Italian musical direction meaning “with spirit” or “with fire,” the band mixes the old school funk influences of Sly Stone and James Brown with contemporary luminaries like Prince and D’Angelo into a fresh sound, so clearly in evidence for this performance filmed in June 2017 during the 35th San Francisco Jazz Festival.
The band has shared the stage with Galactic, Karl Denson’s Tiny Universe, Fishbone, Meshell Ndegeocello, and Trombone Shorty, and their appearance on Austin City Limits inspired PopMatters to call them “the best new live band in America.”
Their full-length debut, Paradise, was produced by the legendary Mario Caldato Jr. of Beastie Boys fame.