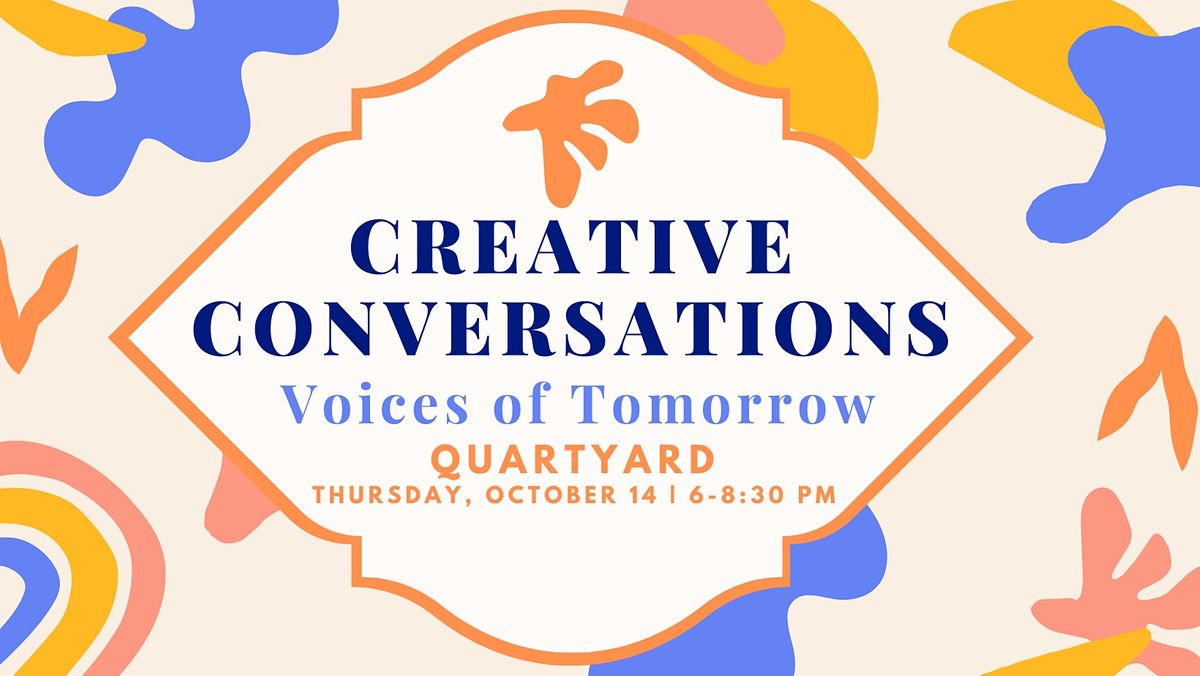 Advertisement
Rising Arts Leaders is proud to welcome four distinguished artists and culture makers to the Creative Conversations stage.
About this Event
Creative Conversations: Voices of TomorrowRoger Guenveur Smith, Charles McPherson, Gill Sotu and Gaidi Finnie discuss their ground-breaking careers and uplifting the Black voices of tomorrow in the Arts.

Rising Arts Leaders is proud to welcome four distinguished artists and culture makers to the Creative Conversations stage: Roger Guenveur Smith, Charles McPherson, Gill Sotu and Gaidi Finnie, for a one-night only event, highlighting their groundbreaking careers in film, music, theatre and visual art with a special focus on uplifting the Black voices of tomorrow in all aspects of the arts and culture sector.

This group of accomplished artists will impart their stories and career wisdom to our multigenerational community of arts and culture workers. We will look to their histories and unique artistry to support emerging Black leadership and new voices in stepping forward, while also encouraging institutions of all disciplines to create equitable representation and programming.

Please note: For your safety and the safety of others, face masks are suggested. The first 15 guests will receive a complimentary Rising Arts Leaders San Diego signature mask.

His Bessie Award-winning RODNEY KING is currently streaming on Netﬂix.

His FIVE HUNDRED LIVES PER MILE, inspired by the construction of the Panama Canal, was commissioned by the Old Globe.He has also staged studies of Jimi Hendrix and Bob Marley, iconoclast artists Jean-Michel Basquiat, Simon Rodia, and Charles White, as well as travelogues of Iceland, New Orleans, and Philadelphia. For San Francisco’s Campo Santo ensemble, he wrote and directed CASA DE SPIRITS.

His latest solo is OTTO FRANK, an intimate meditation on the father of diarist Anne Frank.

Roger studied at Yale University and Occidental College, and has taught at both institutions, as well as CalArts, directing his Performing History workshop.

Charles McPherson was born in Joplin, Missouri and moved to Detroit at age nine. After growing up in Detroit, he studied with the renowned pianist Barry Harris and started playing jazz professionally at age 19. He moved from Detroit to New York in 1959 and performed with Charles Mingus from 1960 to 1972. While performing with Mingus, he collaborated frequently with Harris, Lonnie Hillyer (trumpet), and George Coleman (tenor sax).

Mr. McPherson has performed at concerts and festivals with his own variety of groups, consisting of quartets, quintets to full orchestras. Charles was featured at Lincoln Center showcasing his original compositions 15 years ago, and once again joined Wynton Marsalis and [email protected] Orchestra in April, 2019 honoring his 80th Birthday where they arranged and performed 7 of Charles’ iconic original compositions. Charles has toured the U.S., Europe, Japan, Africa and South America with his own group, as well as with jazz greats Barry Harris, Billy Eckstine, Lionel Hampton, Nat Adderly, Jay McShann, Phil Woods, Wynton Marsalis, Tom Harrell, Randy Brecker, James Moody, Dizzy Gillespie, and others.

Charles was the featured alto saxophonist in the Clint Eastwood film “Bird,” a biopic about Charlie Parker. Charles has received numerous awards, including the prestigious Don Redman Lifetime Achievement Award and an Honorary Doctor of Fine Arts from California State University San Marcos. Charles performed this past April at the NEA Jazz Masters 2019 performance during Stanley Crouch’s tribute. Widely recognized as a prolific composer, Charles is now Resident Composer for the San Diego Ballet, where he has written three original suites for chamber music and jazz combos. In the summer of 2019, Dr. Donnie Norton will compile the entire book of Charles’ compositions for publication.

McPherson remains a strong, viable force on the jazz scene today. Throughout his six decades of being an integral performer of the music, Charles has not merely remained true to his Be Bop origins, but has expanded on them. “Charles is the very definition of excellence in our music,” said Marsalis, a longtime admirer. “He’s the definitive master on his instrument. He plays with exceptional harmonic accuracy and sophistication. He performs free-flowing, melodic and thematically developed solos with unbelievable fire and an unparalleled depth of soul.”

He isn’t strictly a poet, a musician, a writer, a DJ or host. Effortlessly combining the artistic elements of himself, Gill weaves poetry into musical performances and improvisational songs into hosting gigs. Ever present is a forceful undercurrent of soulful, comedic, thought-provoking passion that engages and inspires his audiences throughout California.

Currently, Gill is a teaching artist and commissioned playwright with The Old Globe Theatre, a program director and teaching artist at Intrepid Theatre, as well as the Artist In Residence at Makers Church in San Diego. He has just finished an Artist In Residency at the Jacobs Center for Neighborhood Innovation where he was commissioned to write/direct two full length plays. Gill wrote and performed all the poetic segments to Melissa Adao's dance theatre showcase, "Hip-Hop CabHooray!" Which won an award for Outstanding Production at the 2015 Fringe Fest. He has opened for Grammy-nominated legend Sheila E, as well as Talib Kweli. Partnered and performed with the San Diego Symphony, has been commissioned to create plays for The Old Globe and CSUSM. Wrote and performed numerous poetry pieces for the United Way of San Diego, San Diego's Fashion Week, and performed the closing number for TEDx San Diego in 2013 & 2016, hosted in 2017 and was named musical director and featured performer in 2020.. The San Diego community continues to take notice of Gill’s talent and charisma, as he’s been featured on NBC 7's Art Pulse TV and was named the 2012 & 2013 San Diego Raw Performing Artist of the Year.

Amidst regular performances, Gill hosts events throughout the county and also conducts poetry workshops in schools across California and has facilitated poetry workshops within San Diego County’s juvenile detention center for over 2 years as well as currently conducting Shakespearean performance and reflection workshops at Centinela State Pr*son. He finds the creativity and honesty expressed by these elementary through high school students to be an incredibly rewarding experience and reminder of the importance of speaking one’s own truth.

Gill Sotu is a paradigm shifter whose audience feels that he’s speaking to them individually, making a performance to hundreds seem more like an intimate dialogue between close friends. Charismatic and with an ability to adapt to any event, Gill quickly garners people’s attention and doesn’t let go until he says “Thank you”.

Gaidi Finnie is the Executive Director of the San Diego African American Museum of Fine Art, a “museum without walls” that collaborates with other organizations to present and preserve the art of African Americans globally and to broaden the knowledge and understanding of the visual arts throughout Southern California and the San Diego Community.

Most recently, they mounted Say Their Names, a Memorial Exhibit honoring individuals who have died at the hands of those perpetuating injustice and systemic racism, part of a nationwide initiative spurred by the protests of 2020.

The arts have always been part of Gaidi Finnie’s life.

He has served as executive director of the AjA Project and Chief Operating Officer of Bayview Baptist Church, Gaidi Finnie has also served four years as Managing Director of the North Coast Repertory Theatre, Solana Beach, CA. From 1997-2007 Mr. Finnie served as Assistant Director of The San Diego Museum of Photographic Arts (MOPA). During his final year, he served as MOPA’s Interim Director.

Mr. Finnie feels strongly about improving the community in which he resides. He served on the Port of San Diego Public Art Committee from 2002 to 2008, chairing the organization in 2006. He has chaired the Imperial Beach Public Art Board as well the Architectural Design Review Board. He is the former President of the Board of Directors for Balboa Park Central, a nonprofit organization task with the coordination of the numerous institutions occupying the park and the visitors they serve. In 2014, the Balboa Park Central merged with the Balboa Park Conservancy and most recently merged with the Friends of Balboa Park to become Forever Balboa Park.

He has received numerous awards and recognition including being named San Diego Magazine’s 2009 “ 50 People to Watch”, recognition by the City of Imperial Beach City Council and the Port of San Diego for his work to bring public art to public spaces.

In 2013. Mr. Finnie holds a Bachelor of Arts degree from Augsburg College, a Certificate of the French Language from the College International Academy Français, and a Juris Doctorate from the William Mitchell College of Law.