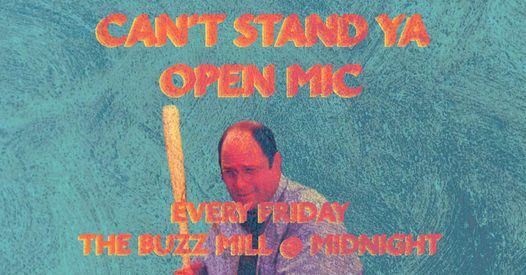 Can't Stand Ya, an open mic that involves both the comics and the audience.
Have you seen The Gong Show? Ever thought, "Hey it needs a Seinfeld reference!", well buddy. We have a show for you.
Comics get a maximum of five minutes on stage. But if the audience isn't feeling the comics set, then they have the option to send them off early by yelling "Can't Stand Ya" (this is the only form of heckling allowed ).
Comic Rules: If you receive a majority vote from the audience, then your time is up. Roughly five votes for every ten audience members.
Audience Rules: Do not heckle the comics outside the one phrase. If you are just repeating the phrase, over and over, during the same set. You will be asked to leave. If you are just constantly voting every comic, then we'll put you on the spot, and see what your deal is.
Let's make this a fun show for both the comics and the audience. Thanks.