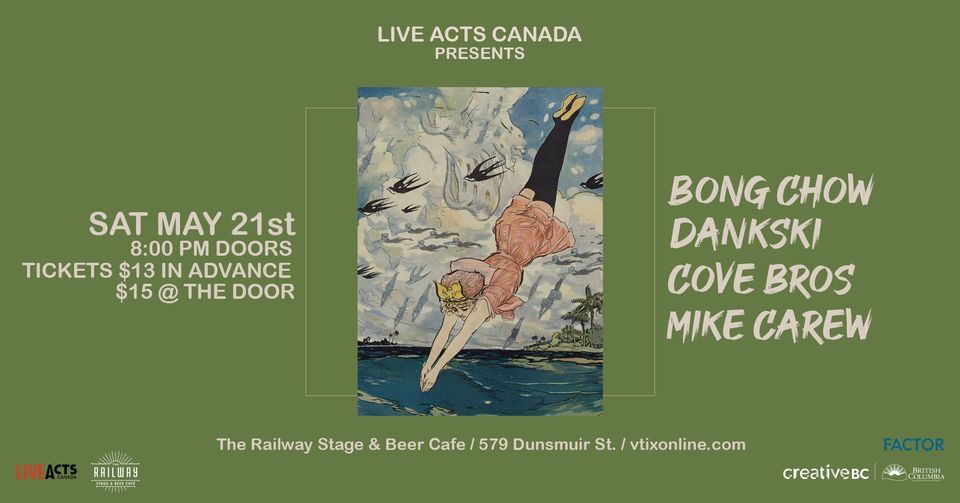 Bong Chow//
Bong Chow was originally formed in 2016 in Vancouver, British Columbia, by lead singer Create Krys and guitarist Hour Chopper, as they wrapped up playing on a separate project earlier that year. Coming from a rock and alternative music background, Chop & Krys had the urge to venture into different territory: the subtle and yet uplifting sounds of reggae.
This new adventure prompted Chop & Krys to find talented and open-minded musicians to complement their abilities in guitar and vocals respectively. It was then they came across fellow musician David Garzon and asked him to join. Garzon, originally from Colombia, quickly added a new dimension to Bong Chow as he plays multiple instruments: keyboards, guitar and assortment of latin percussion. They were complimented by TI on drums and CV on bass.
During this first rendition of Bong Chow, which focused in covering artists that had influenced them in their youth such as Sublime, Bob Marley and The Police, they frequented local Vancouver pubs, casinos and parties. Response to their take on these classic artists was positive wherever they played, and it was this response that prompted the core trio of Bong Chow to reconsider being a cover band – they felt they had more to offer their fans.

After a brief retreat, Bong Chow re-grouped in early 2018 and joined forces with CJ Sturch on drums and Dan on bass. This is when Bong Chow really struck gold. Dan’s bass playing ability, and studious character of reggae, 70’s blaxplotation funk, and other genres, gave the band great edge and range. That is when Bong Chow decided to pursue their own direction and focus solely on original content. Creativity and inspiration took over the band and they started producing new music that had a blend the band considers unique: a solid base of reggae with tones and textures of latin fusion, funk, rock and jazz. Shortly after in mid-2018, Ollegro joined the Chow playing saxophone to complete the six-member band. However, in the beginning of 2019 Sturch decided to leave the band for personal reasons and a search for a new drummer ensued.

After a brief hunt for new percussion Bong Chow got lucky once again. They not only found 1 drummer but 2!!! Orlando Paco Faustino and Brian Brigz joined on the kit, with each of them bringing two unique styles: Paco has funk and blues background, while Briggz a ska and reggae one. This further enhanced the Bong Chow sound and music making ability.
Later in 2019, Alex Fiore (the 27th born son to the late, great Tito Puente) joined Bong Chow to add his accents on the timbales and congas to compliment the percussion section of the band.

The result of this fortunate convergence of talented musicians is one that is taking Vancouver by storm. The band frequents legendary venues such as The Railway Club and The Fairview Pub in Vancouver, as well as appearances in festivals in British Columbia, always leaving dancing crowds clamoring for more.

Bong Chow is currently rehearsing and recording original content to be released in 2020. The band is excited to continue to bring their unique sound and vibe and expand their fan base beyond Vancouver.
Spotify - https://open.spotify.com/artist/3RAmLE3dE0H6D0nFs6mtXm
Soundcloud - https://soundcloud.com/user-570650639
Youtube - https://www.youtube.com/channel/UCWXaB_7OenjF71Z7xGSN5Gw
Insta - bongchowreggae
FB - @BongChowMusic

Dankski//
Who is the loved, loathed, mysterious badass, Banksy? More importantly, who is Dankski? Related or not, in punk we trust, and in music lies the absurd. Intelligent artists share more than just street cred, killer instincts, and sharp edges. It’s about rock & roll, social disruption, and stirring shit up.
Dankski or Banksy. Chicken or egg. OG troublemakers and anti-media darlings, turned on to the truth: opposition rules. Anything goes. Fact is stranger than fiction. Turn up for what.
Website & Socials - https://dankski.com/?fbclid=IwAR0NLPHs-KelPsXdcuJbmMiLmrq2vZm4pu3Kny0OVjA3b33uoG2HYao3hYM

Cove Bros//
Cove Brothers is a fluid musical project put together by the singer / songwriter Jesse Lorenz to bring three decades of music to life in the form of live performances. Jesse’s songs have lived on SoundCloud and have been performed by other bands - and now his musical ideas get to see the dim light of local Vancouver live venues in pure, uncompromised form. Depending on the songwriting period that’s brought to life, Cove Brothers delivers straightforward classic rock, keyboard infused melodic ballads, polished dance-friendly pop, and few other musical stops along the way. This musical variety fuels spicy, energic sets that leave audiences feeling happy and thirsty for more.
Website - https://www.covebrothers.com/
Instagram - https://www.instagram.com/covebrothers/
Soundcloud - https://soundcloud.com/cove-brothers

Mike Carew//
Born in Lachine, Quebec, Mike began writing music at twelve and performing at fifteen. Influenced by alternative, if not quirky, Blues, Folk and Country musicians and lyricists, Mike focused on developing his own voice and style after moving to Boston in 1984.
He relocated to Vancouver in 1994.
Mike has released “32” albums. "In the Root" (working name), scheduled release date Oct. 2022
Spotify: https://open.spotify.com/artist/6tsxcfE75vbgErspDPj0hK
Youtube: https://www.youtube.com/channel/UCZDjPvK3NDONUhqwwEd4qzA
Website: https://www.mikecarew.com/ 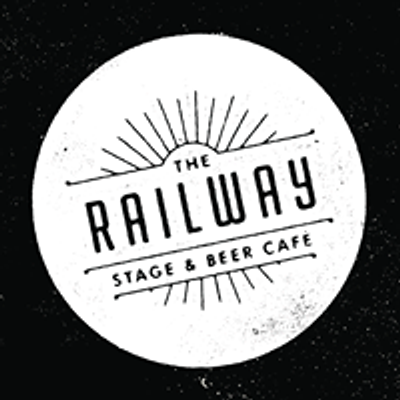