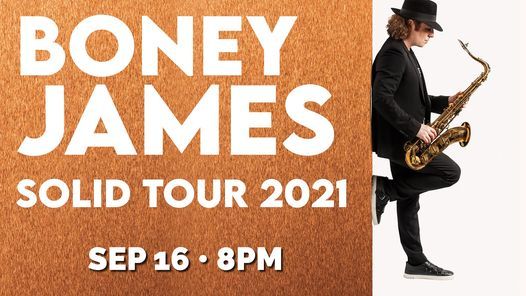 Advertisement
Due to the global health crisis as well as travel and performance restrictions, the Boney James Solid Tour 2020, originally scheduled for Friday, September 18, 2020 has been rescheduled.
The new date for this show is Thursday, September 16, 2021 at 8:00 pm.
Tickets to the original Boney James Solid Tour 2020 show date (September 18, 2020) will be honored at this show.
Four-time GRAMMY nominated, genre-blurring artist Boney James is touring in support of his seventeenth CD Solid.
“A solid relationship is when someone has your back and will stand by your side no matter what,” explains Boney James about the title of his new CD. “Solid is a word that has a few meanings, but this one really resonated with me and became the theme of the record.”
In a solo career now spanning twenty-eight years, eleven of James’ albums have topped the Billboard Contemporary Jazz Chart and two have made the top 10 on the R&B Albums Chart, a rare feat for an instrumental artist.
Boney James was gigging with bands by the time he was in his early teens. He apprenticed as a sideman for artists like Morris Day and the Isley Brothers before striking out on his own in 1992. The independently released “Trust” led immediately to a major label deal and a string of increasingly successful recordings and live performances.
To date, James has racked up sales of more than three million records, four RIAA gold albums, four GRAMMY nominations, a Soul Train Award, and nominations for two NAACP Image Awards. In 2009, Billboard named him one of the Top 3 Contemporary Jazz Artists Of The Decade along with Kenny G and Norah Jones.
Boney is also renowned for his compelling live performances. According to The Boston Globe: “…James swaggers across the stage like a blacktop hero draining treys on an overmatched opponent. He even weaves his way through the crowd, all but daring them not to have a good time.”
Event Date: September 16, 2021
Official Artist Website: BoneyJames.com
Advertisement