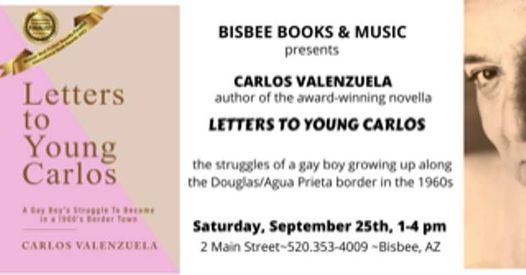 Advertisement
Please join us as Bisbee Books & Music welcomes author Carlos Valenzuela to our Bisbee Artist Series. Carlos will be signing his first book: Letters to Young Carlos
Carlos grew up along the US/Mexico border cities of Agua Prieta and Douglas, AZ the fourth child of a cattle ranching family. He attended American schools from an early age and obtained a master's in International Management. He initially worked in Argentina, Brazil, and Mexico City as a young manager but left the corporate world to pursue more creative interests. He moved to London in 1973, where he studied hairdressing at the Vidal Sassoon Academy and later worked for Pivot Point International as a worldwide spokesperson. His niche is training and education and has written numerous technical and personal development programs. He started writing late in life as a hobby until invited to contribute to a major beauty magazine where he is now widely read by thousands of followers. Letters to Young Carlos is his first book.
Letters to Young Carlos
In a world full of hate, Carlos finds the one he loves most. But what happens when the one he loves turns out to be another boy? Carlos was just a young boy himself when he first encountered an amazing young man named Jesse. Through his love, he discovers who he really is and dares to embrace the love and stand up for himself. Letters to Young Carlos is a tender coming of age story set against a conservative small town’s judgmental gossip, a homophobic Papa, and a church’s strict teachings. Set in the 1960s, Carlos’ story of discovery and eventual acceptance resonates with anyone gay or straight who walks to the beat of their own drum. The story guides the reader to understand a world full of contradictions better. Young Carlos navigates fantasy, love, heartbreak, betrayal, and friendship and eventually rises above it all.
WINNER OF BEST FICTION NOVELLA FINALIST 2021