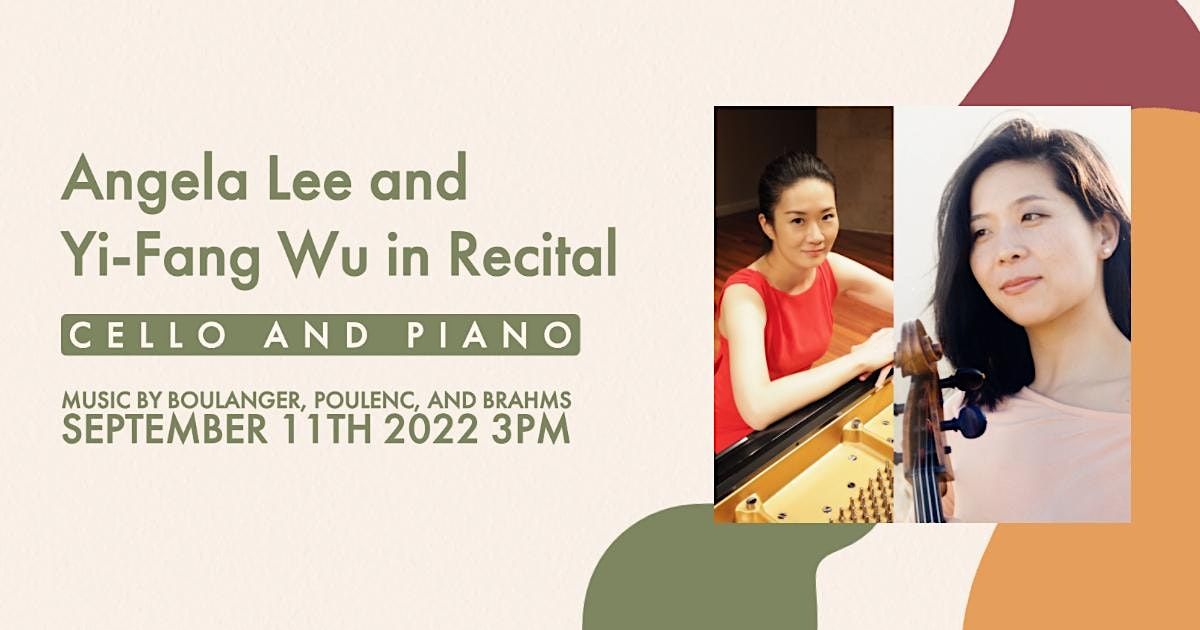 Johannes Brahms: Sonata for cello and piano No.2 in F major, Op.99

A graduate of The Juilliard School and Yale School of Music, cellist Angela Lee is a recipient of a Fulbright scholarship to study in London with William Pleeth, a grant from the Foundation for American Musicians in Europe, the Jury Prize in the Naumburg International Cello Competition, and a cello performance fellowship from the American-Scandinavian Foundation. As a theater and ballet enthusiast, Angela Lee was the solo cellist in Harris Yulin’s production of Don Juan in Hell starring Ed Asner, Cherry Jones and René Auberjonois. She is a founding member of The Lee Trio which won top prizes in the Kuhmo International Chamber Music Competition in Finland and the Gaetano Zinetti International Chamber Music Competition in Italy. The Trio has recorded for Delos and Innova and regularly appears in major venues across North America, Asia, and Europe including Carnegie Hall, Berlin Philharmonie, and Leipzig Gewandhaus.

Angela Lee has worked with Eliot Feld at Ballet Tech, premiering The Last Sonata, set to Claude Debussy's Cello Sonata. She has also collaborated with writer Mark Salzman in Music & Story, performing J.S. Bach Suite No. 3 for Solo Cello. Using music to foster peace and goodwill, Angela Lee has made numerous humanitarian trips to the Republic of the Philippines and the former Yugoslavia. While on a U.N.-sanctioned tour of six war-torn cities throughout Bosnia-Herzegovina, she performed for American and NATO troops and displaced civilians. Her 1762 cello is made by Nicolo Gagliano from Naples, Italy. In addition to coaching chamber music at the San Francisco Conservatory of Music, Ms. Lee serves on the Board of The Resonance Project as well as the Alumni Leadership Council of San Francisco Symphony Youth Orchestra.

Yi-Fang Wu’s love affair with music took over her existence after she had already graduated from National Tsing-Hua University in Taiwan where she majored in English Literature. She arrived at the Cleveland Institute of Music and earned a Master’s Degree in Piano Performance studying with Paul Schenly and Daniel Shapiro. CIM was the very first music school in her life, and there she quickly absorbed music theory, history, and everything else at a dizzying pace during the two-year program. Her life transformed even further after discovering that her heart not only belonged to solo performance, but also in musical interactions with others. She immediately joined the Collaborative Piano program to formally train with Anita Pontremoli at CIM. It was the most exciting period during which Yi-Fang developed a love of string repertoire, and has since then collaborated with many wonderful musicians while also being a staff pianist and chamber coach of San Francisco Conservatory’s Pre-College division.

During the pandemic, Yi-Fang has not let COVID-19 stopped her passion in performance that she has won 3rd prize in Chicago International Music Competition and was one of the finalists at Neapolitan Masters Competition in Italy.