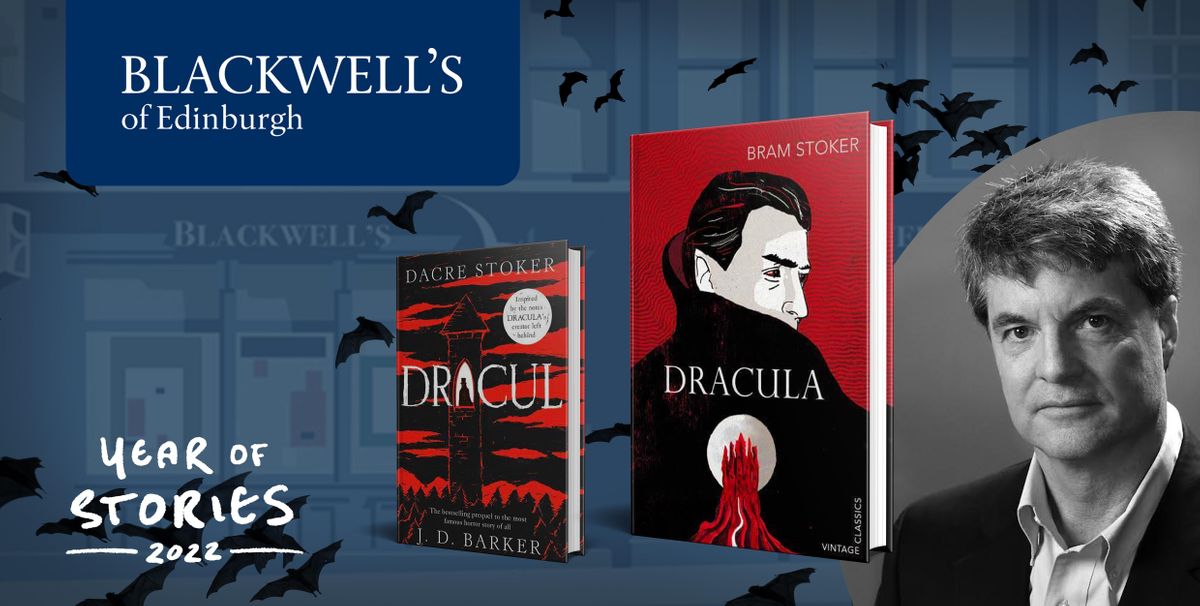 Advertisement
Join Dacre Stocker as he talks about Dracula's Scottish connections on the 125th anniversary of its publication.
About this Event

Blackwell's of Edinburgh is honoured to be partnering with to bring you this very special event as part of . To celebrate the 125th anniversary of the publication of by Dacre Stoker will be touring the UK and joining us for an exclusive literary engagement as part of this momentous milestone.

Book your tickets for Tuesday 24th May at 7 pm for a deep delve into Dracula's fascinating Scottish connections- for example, did you know Bram Stoker worked for Henry Irving’s theatre company and was involved in the opening of the Edinburgh Lyceum Theatre in 1883? It is also believed that the city of Glasgow provided the inspiration for the name of Count Dracula’s servant Renfield, and that Sir Arthur Conan Doyle himself was considered to be one of his closest literary friends? Join us as we unravel the mysteriously tangled web of inspirations and links Scotland has to the greatest work of literary horror.

There will be complimentary celebratory refreshments.

Originally published in 1897, Dracula is a masterpiece of the horror genre, probing the identity, sanity and the dark corners of Victorian sexuality and desire. It begins when Jonathan Harker visits Transylvania to help Count Dracula purchase a London house, and makes horrifying discoveries in his client's castle. Soon afterwards, disturbing incidents unfold in England - an unmanned ship is wrecked; strange puncture marks appear on a young woman's neck; a lunatic asylum inmate raves about the imminent arrival of his 'Master' - and a determined group of adversaries prepare to battle the Count.

'I am Dracula. And I bid you welcome to my house'

He is deathly pale. His fingernails are cut to sharp points. His teeth protrude menacingly from his mouth in clouds of rancid breath… Yet even Count Dracula's unnerving appearance and the frightened reaction of the local peasants fail to warn Jonathan Harker, a young man from England, about his host. Little does Jonathan know that this is a land where babies are snatched for their blood and wolves howl menacingly from the forest, where reality is far more frightening than superstition. What's more, it's going to be up to him to stop the world's most bloodthirsty predator…

is the great grand-nephew of Bram Stoker and the international best-selling co-author of Dracula the Un-Dead ( 2009), the official Stoker family endorsed sequel to Dracula. Dacre is also the co-editor (with Elizabeth Miller) of The Lost Journal of Bram Stoker: The Dublin Years (2012). Released in October of 2018, Dracul, a prequel to Dracula, co-authored with JD Barker, was the UK’s # 1 Bestselling Hardcover Novel in Horror and Supernatural in 2018, and a top 5 finalist by the Horror Writers Association for the Bram Stoker Award® for Superior Achievement in a Novel. Film rights for Dracul have been optioned by Paramount Studios.

A native of Montreal, Canada, Dacre taught Physical Education and Sciences for twenty-two years, in both Canada and the U.S. He has participated in the sport of Modern Pentathlon as an athlete and a coach at the international and Olympic levels for Canada for 12 years. He is also an avid player and coach of the unique game of Real Tennis. In May of 2016 an athlete he had been coaching for the past 4 years, Camden Riviere, won the World Championships of Court Tennis.

Dacre has consulted and appeared in recent film documentaries about vampires in literature and popular culture. The Real Vampire Files (2010 History Channel), The Tillinghast Nightmare, (2014 Historical Haunts), Secrets of the Dead (2015 PBS), Mysteries at the Museum, (2017 Travel Channel) Legend Hunter (2019 Travel Channel) He currently hosts tours to Dublin Ireland, Whitby England, and Cruden Bay Scotland, to visit places where Bram Stoker lived, was educated, worked, researched, and wrote Dracula. He also leads groups to Transylvania to explore both the life and times of the historic Vlad Dracula lll and also the locations where Bram Stoker set his famous novel.

Stories are a vital part of Scotland’s culture and every community has a different tale to tell. Shared stories, whether spoken, written, sung or filmed are what give a sense of place, history and belonging. This year you can look forward to events by community groups, museums, heritage sites and other visitor attractions with storytelling always at the heart of it.

You’ll also have the chance to experience the diversity of stories that Scotland has inspired by visiting the real-life locations from your favourite books, films and songs. From old icons to emerging voices, local legends to tales of the natural world, Scotland’s Year of Stories is sure to capture your imagination.

To find out more about the year, have a look at this video below, which is narrated by one of Scotland’s best loved actors, James Cosmo.

The bookshop has level access, events are seated and speakers use microphones. If you have any concerns about accessibility, please do get in touch and we will do our best to accommodate your needs.

Covid 19 Precautions will be adhered to in order to ensure the safety of our attendees, authors and booksellers. Please do not attend the event if you are displaying any symptoms of Covid-19 or if you have been advised to self isolate. We ask that all ticket holders wear a face mask whilst in the shop, medical exemptions will continue to apply. For more information or if you would like a signed copy because you can't make it to the event, please contact the Blackwell's events team on 0131 622 8222 or [email protected]